In 1963, the Leipzig painter Werner Tübke (1929-2004) sketched a painting titled 'Socialist Youth Brigade' commissioned by a machining factory in Leipzig. In 2010, 24 sketch books and diaries by Tübke were bequeathed to the university library by his widow. The estate is one of more than 300 of academic and artistic legacy in the university library.

This sketch (Slider, Fig. 1) is a preliminary work of Tübke’s large painting 'Socialist Youth Brigade,' for which the painter received the commission of the Culture Association of the GDR in 1964. This first sketches date from 1962/63, among which the 'Brown Sketchbook' gives the version of the painting. This does not show the brigade at work, as would be expected, but instead celebrating. Tübke drew individual portraits of every person in the sketch. In the finished painting (today in the Museum of Visual Arts, Leipzig) another, earlier painting by Tübke, 'The Five Continents' (1958) commissioned by Leipzig’s Hotel Astoria, can be seen in the background. The 'Socialist Youth Brigade' is celebrating in the best hotel of the city.
The GDR used art, like the Soviet Union, as a means to educate the people. A positive representation of socialism was wished for. For the artists art on commissioned meant relative job security on the one hand, on the other it also meant accomodating.
Workers in the GDR were especially focused on. They were turned into positive heroes though idealization and typification. The brigade painting would support this convention through the ideal representation of workers at work. Tübke, however, followed the official expectations only partially, instead cultivating a manneristic realism without socialist pathos.

The Journals and Sketch Books of Werner Tübke

The 12 sketch books and 12 journals by Werner Tübke were given as a gift to the University Library in June of 2010. Donor Brigitte Tübke-Schellenberger had found the previously unknown volumes in 2007 in the writing desk of her husband.
Among the German painters of the 20th century Werner Tübke is regarded as a traditionalist. His bequeathed sketchbooks and journals document the period from 1950 to 2001. The sketchbooks themes range over quite different aspects of his artistic production, from the human form to essays in artistic theory. In 1955 Tübke became professor at the Academy of Visual Arts (Hochschule für Graphik und Buchkunst) in Leipzig. In 1964 he was named Docent, and became in 1972 finally professor at the school.
Several sketchbooks portray travels, like one to the Soviet Union from 1961/62. Later he traveled to Italy, France, Greece, West-Germany and the USA. On these trips the artist noted impressions and spontaneous ideas in his sketchbooks.

The university library holds over 300 estates and partial estates from individuals, archives, and institutions. Estates concern the history of Leipzig University and of its disciplines, as well as other areas of culture. The materials range from the 16th century to today. Some of the important estates came from the professor of literature Johann Christoph Gottsched (1700-1766), the professor of law Friedrich August Biener (1787-1861), the physician and philosopher Gustav Theodor Fechner (1801-1887), the orientalist Heinrich Leberecht Fleischer (1801-1888), the theologian Konstantin von Tischendorf (1815-1874), the physicist Otto Heinrich Wiener (1862-1927), and the professor of media studies Karl Bücher (1847-1930). The university library has acquired also recently important estates, among others the estates of the Leipzig musician and composer Julius Klengel (1859-1933), of the musician and musicologist Hans Grüß (1929-2001) and of the painter Werner Tübke (1929-2004). Also worthy of reference are the artistic estates and documents of the composer Franz von Holstein (1826-1878), of the singing teacher and choir director Carl Friedrich Zöllner (1800-1860) and of the poet Wilhelm Gerhard (1780-1858).
There are documents with high historical value especially in the estates containing considerable collections of letters. The largest letter exchange is between the German literature professors and editors of the Literarisches Centralblatt Eduard Zarncke (1857-1936) and Friedrich Karl Theodor Zarncke (1825–1891) with around 25,000 documents. 9,000 letters belong to the estate of Wilhelm Streitberg (1856-1925), who as the editor of the journal Indogermanische Forschungen is seen as one of the founding fathers of modern linguistics. The worldwide recognition of German universities in the second half of the 19th century and the first half of the 20th century is further corroborated by the estate of the Assyriologist Heinrich Zimmern with 3,500 letters, the more than 3,000 letters to the national economist Wilhelm Stieda, the 4,00 letters of the historian Erich Brandenburg, the 5,400 letters of the scholar of Nordic languages Eugen Mogk, the 3,500 letters of the law professor Gustav Hänel (1792-1878), the 4,800 letters of the professor of botany Gustav Kunze (1793-1851) or the 6,000 letters of the indologist Johannes Hertel. The 3,600 letters of the Zerbst superintendent Wolfgang Amling (1542-1606) go back to the late 16th century.

Archive in the University Library

Remarkable in the archives within the University Library are the archives of publishing houses. More than 70,000 documents are included in the historical archive of the Felix Meiner publishing house, a leading publishing house for philosophy of Germany then and now, known worldwide for its book series 'Philosophische Bibliothek'. Founded in 1911 by Felix Meiner in Leipzig, the publishing house was destroyed during the War, so its historical archive only dates from 1944 (and up to 1968). One outstanding collection within the University Library is the archive of the Karl Quarch publishing house, which was founded in 1919 and specialized in the manufacturing of prints. It was the only publishing house of the GDR that was not nationalized. The extensive archive contains not only conserved office documents but also a large collection of typopgraphic material and printing plates as well as the remains of the published works. Also worthy of mention are the archives of the publishing houses by J. C. Hinrichs an by Diederich, both of which were producing in Leipzig.
Alongside the individual estates and the archives of publishing houses there are the documents of academic societies. The archive of Jablonowski's Academy of Sciences is a major source for the history of sciences. The society was founded in 1769 by the Polish Prince Józef Aleksander Jabłonowski (1711-1777) and was based in Leipzig. There is additional source material from the 17th century, namely the protocols of the scholarly association 'Collegium Gellianum', existing from 1641 to 1673, and from the society 'Collegium Anthologicum', founded in 1655. From more recent times originate the documents of the 'Leipzig Journal Society' (founded in 1768), the 'Historical-Theological Society' (founded in 1814), the 'Leipzig Evangelical Mission Club' (founded in 1820), and the 'Society for Obstetricians' (founded in 1854).
In 2011 the Leipzig Dance Archive was taken over by the university library. Originating from an institute located at the Academy of Arts of the GDR, it is dedicated to the historical documentation of dance.

Letter from Joseph Partsch to Karl Bücher, August 4, 1912 (Slider, Fig. 2)
[NL 182/P 45-48]
Joseph Partsch (1851-1925), professor of geography at Leipzig University, traveled in 1912 to America for the 'American Geographical and Statistical Society'. From the bord of the steamer 'Amerika' Partsch directed a letter to Karl Bücher (1847-1930), professor of national economy at Leipzig University, in which he greeted him and sent him all the best wishes for the future. For the letter he used the stationary of the shipping company 'Hamburg-Amerika-Linie'.

Ferrotype with portrait of Otto Geibel and Julius Klengel, 1895 (Slider, Fig. 3)
[NL 252/N 25]
In 1895, the Leipzig musician and composer Julius Klengel (1859-1933) had his photo taken at the Krystallpalast, then the largest place of public entertainment in Germany, together with Otto Geibel, who is now unknown. The photograph is a ferrotype, in which a collodion layer on a darkly lacquered iron sheet is exposed and then developed. Because this method requires direct exposure of the iron plate, no copies are possible; therefore, all ferrotypes are one of a kind.

Georg Zachariae: Pencil drawing of a battle, March 1849 (Slider, Fig. 4)
[NL 297/2/2/No. 17]
Georg Zachariae (1825-1858) studied at the Leipzig Academy and applied himself as a drawing teacher. In the 1840s and 1850s he taught various members of the Grabau family from Leipzig-Leutzsch. The leaf made its way into the university library via the collections of the Wustmann family, which were related with the Grabaus. The pencil drawing served as a draft for a larger work and is signed with 'G. Zachariä, März 1849'.

Newsletter of publisher Friedrich Schoell, July 1, 1806 (Slider, Fig. 5)
[NL 268/3/148]
The bookseller Friedrich Schoell (1766-1833), owner of the Paris based firm 'Levrault, Schoell et Co.', sold in 1806 his undertaking to the Basel based bookselling firm 'Thurneyssen'. In a printed newsletter, addressed to the Leipzig bookseller Georg Voss (1765-1842), he made the sale to the German booksellers public. Parts of the correspondence of the Voss bookseller are kept by the university library. 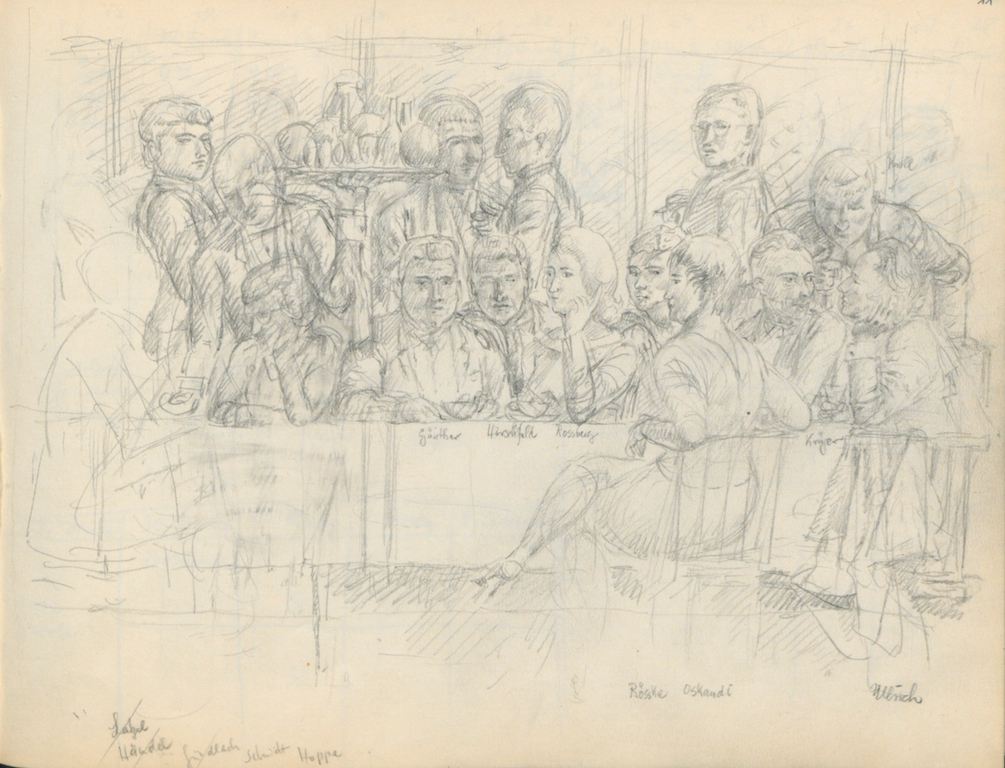 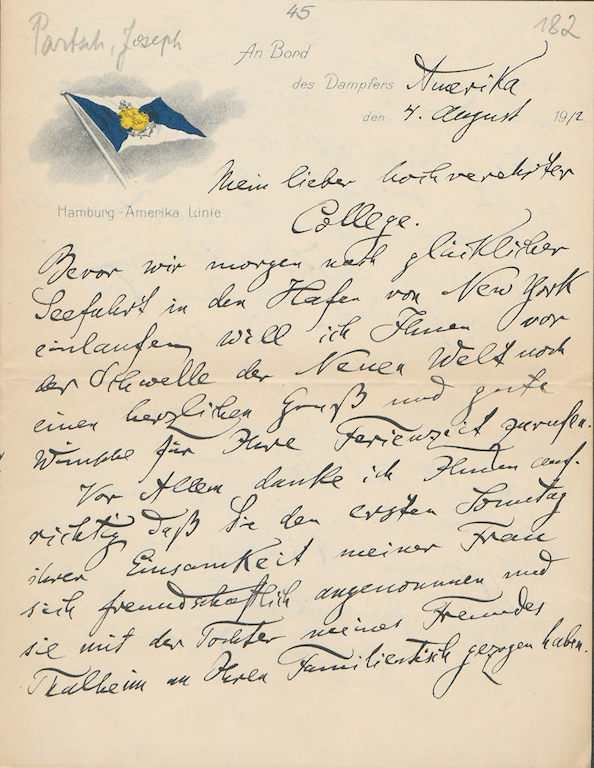 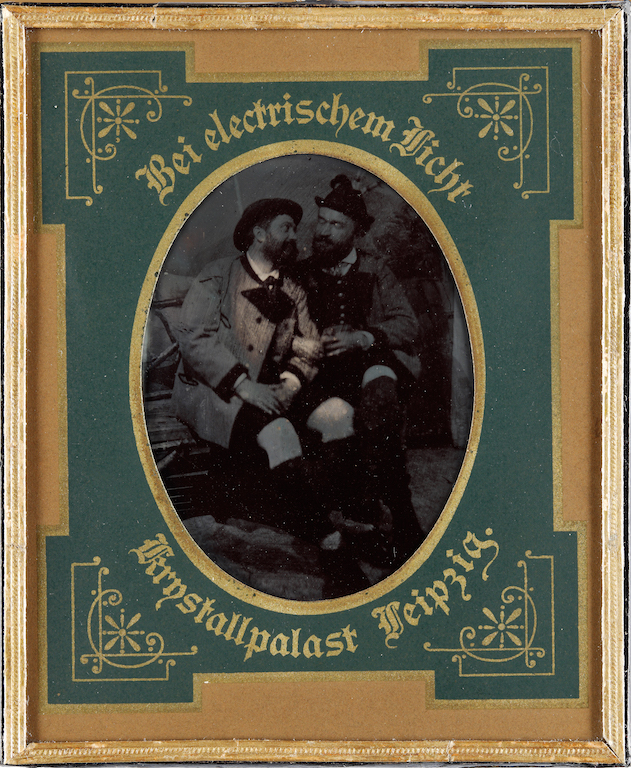 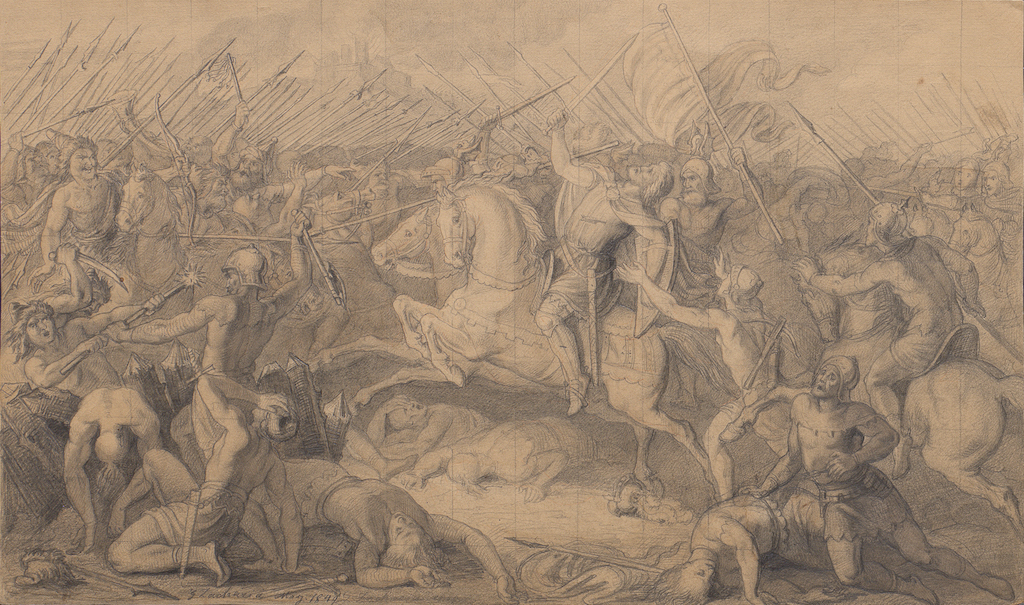 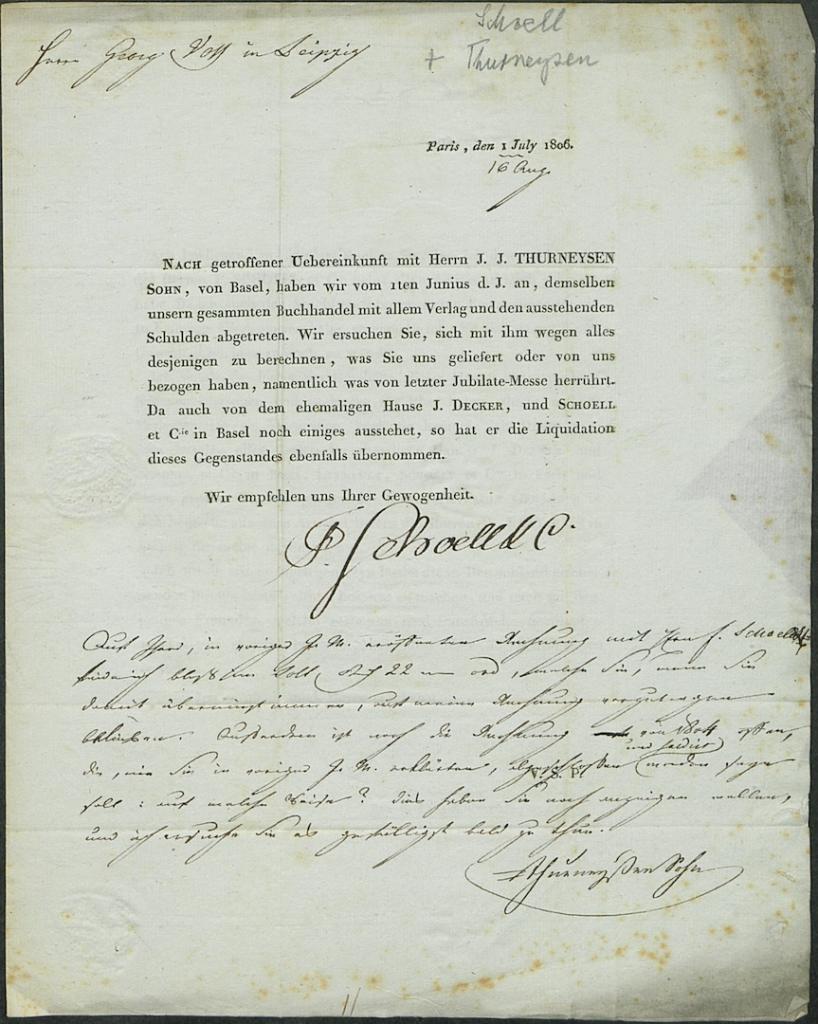 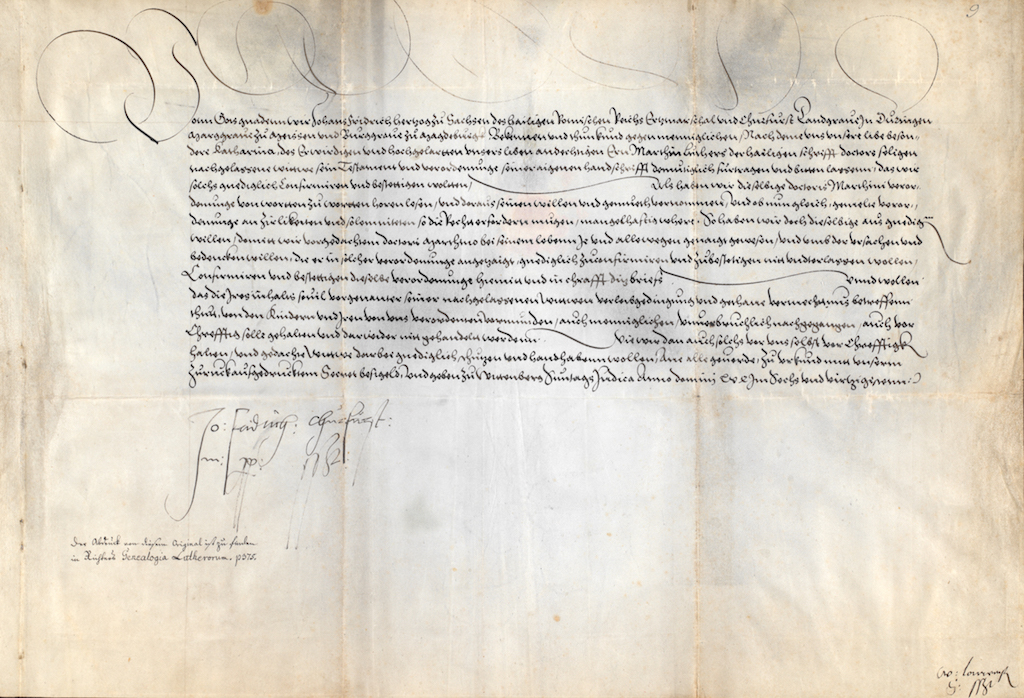