This two-volume Hebrew prayer book for the highest holidays is considered the most beautiful of its kind. Manufactured in southwest Germany around 1310, it was purchased for the university library by its director Christian Gottlieb Jöcher in 1746.

The Leipzig Mahzor (alternatively spelled: Machsor; Slider, Fig. 1) is decorated with numerous illustrations in expensive watercolors and abundant application of gold leaf. At the same time it is a work of calligraphy, in which the words are set in a particular layout with different sizes in order to create an aesthetic and meaningful overall picture, as is exemplified by the displayed page with its framing Towers, supported by two dragons. Its initial is illuminated in order to ceremonially mark the beginning of the morning prayer for the first day of Sukkot. Words (here: 'Beloved [you are, Eternal one]' und 'I wash [in cleanliness my hands']) and paintings are worked into one another. The gorgeous coloring of the two volume manuscript probably took place in a Christian artist's workshop, while the calligraphic text comes from Jewish scribes.

What is a Mahzor?

A Mahzor is a book of prayers and bible readings for the holidays of the Jewish year. It is used in the synagogue by the cantor. During the pogroms against Jews in the years 1348/1349 when the Black Plague was ravaging, Jewish manuscripts were to a large extent destroyed. So only a small group of Mahzor manuscripts survived from the second half of the 13th and the first half of the 14th century, some especially grand like the Leipzig Mahzor.The fact that the Leipzig Mahzor originates in southwest Germany is supported by the style of the book's adornment, which can be associated with the book art of the Upper and High Rhine or that of Franconia. In 2012 the text of Leipzig's Mahzor was analyzed more closely, and it turned out that its text profile corresponds to that of the Worms community, which in the Middle Ages was one of the most important Jewish communities in the German empire.The illumination of the Leipzig Mahzor include altogether two introductory miniatures, 30 ornamentally or figuratively formed illuminations for initial words, seven pages for initial words framed with arcades (these only in volume 2), and 19 scenic representations on the borders of the pages (e.g. biblical stories, Jewish rituals). When it comes to depicting human faces in the figurative paintings they are represented in profile with noses shaped like the beaks of eagles, most likely to skirt Jewish prohibitions on representations of human faces, which can also be seen in other Hebrew manuscripts of the time.

The Mahzor's way to Leipzig

Through additions and notations of ownership we are informed about the fate of the Leipzig Mahzor. While still in Worms in 1553, the manuscript was acquired by somebody whose name is documented as David bar Samuel Dekingen, who probably belonged to the Worms community. He furnished both volumes with numerous addenda and annotations.From the second half of the 16th century the situation of the Jewish community in Worms worsened considerably. The atmosphere of increasing insecurity and harassment in the city and the growing pressure on the Jewish community within the German empire resulted in the emigration of many to the east. At the end of the 16th century the Mahzor may have reached Eastern Galicia (then Poland, today Western Ukraine). A number of further entries point to this. They probably belong to the first half of the 17th century and adapted the book to Polish community rituals.  On page 56r in the second volume rabbis from Lesko and Shebreshin are mentioned. Both locations are in Eastern Galicia and possessed flourishing Jewish communities until being destroyed by the Germans in the Second World War.In the second half of the 17th century the Leipzig Mahzor could have been in the German empire in the area of Saxony and Thuringia. Watermarks from papers that were glued to the inside of the wooden covers point to this location. Perhaps the manuscript came with refugees to the West, after pogroms in Poland in 1648/1651.

In 1746 the Mahzor was bought for Leipzig University Library. The manuscript is the first entry in its acquisitions book (Slider, Fig. 2). It was purchased for the then large sum of 26 reichstalers. The impression the resplendent codex had on the buyer is made clear by the short characterization of the new purchase: 'a handwritten codex of tremendous weight and the highest artistic style in two large folio volumes, with monumental letters, written, it appears, in Spain'.
In 1746, when the Machsor was bought, the University Library had no regular budget for acquisitions. Christian Gottlieb Jöcher (1694-1758; Slider, Fig. 3) was at that time working partially for the University Library and had acquired the money, according to his own account, by purposeful saving. Jöcher was multi-talented: a publisher of multiple biographical dictionaries, a funeral speaker, an editor of the journal Acta Eruditorum from 1719 (and until 1739), professor of philosophy in 1730 and of history in 1732, in 1735 a doctor of theology, and from 1742 also the head librarian of the University Library. He could read Greek, Hebrew, Latin, Italian, English, and French.

Volume 1, 52r: The story of Esther I – Purim (Slider, Fig. 4)
The story in this picture relates to the holiday purim.The high Persian official Haman wanted to murder the Jewish population but the cleverness of Esther eventually caused Haman's execution following the order of the Persian king.  The pictures illustrating the story of Esther begins on this page with a representation of Esther before the Persian king.The sequence of the images follows the occidental  reading direction of left to right, while the text itself – as in all Hebrew manuscripts – is written from right to left. So on this page we see the end of the Esther poem by Eleazar from leaf 51v. Underneath we see three prayers each starting with a capitalized word: cult – crown – queens.

Volume 1, 51v: The story of Esther II – Purim (Slider, Fig. 5)
The text of this page precedes the one on leaf 52r. The representation shows how Haman was hanged with all his sons. On top of the page it says in red: 'They hanged Haman'. Underneath we see a poem with the first letters of every second verse in red and slightly to the left  which together spell the name of the poet 'Eleazar ben Killir'.

Volume 1, 70v: Baking of the unleavened bread – Passover (Slider, Fig. 6)
The page shows the beginning of the evening prayer on the first day of Passover. The beginning of the prayer ('The Night of Care') is calligraphically emphasized with large letters, as well as the repetition of the word order in further prayers.

Volume 1, 73r: Moses parts the Red Sea – Passover (Slider, Fig. 7)
Embellished page for the first day of Passover, which celebrates the exodus from Egypt. The beginning of the prayer is marked with large letters: 'The holy light / of the blessed'.As in the story of Esther, the reading direction of the illustration is left to right, in opposition to that of the text which starts on leaf 72v.

Volume 1, 72v: The prosecution of the Israelites by the Egyptians – Passover (Slider, Fig. 8)
This page is to the right of the representation of the parting of the Red Sea (leaf 73r) and holds the earlier text. The Egyptians are represented as an army of medieval knights. The passage on the page written in large letters is a section from the Kaddish (prayer in praise of God) and reads '[of the whole] house of Israel quickly and in coming times / Say amen'.

Volume 2, 164v: Evening prayer – Yom Kippur (Slider, Fig. 9)
Embellished page with the evening prayer on Yom Kippur (the highest Jewish holiday). Below: the representation of the legend of Abraham in the fire of Nimrod and his miraculous rescue. The dominance of the court scene and the representation of Abraham on a stake could refer to the mass incineration of Jews in the so called 'Rintfleisch massacres' at the end of the 13th century. In the adorned gate above are large words 'He who is strong', under it in red 'as it is written', under that in black 'as merit' and 'beloved'.

Katrin Kogman-Appel, A Mahzor from Worms: Art and Religion in a Medieval Jewish Community, Cambridge 2012

Wikipedia on the Leipzig Mahzor (in German) 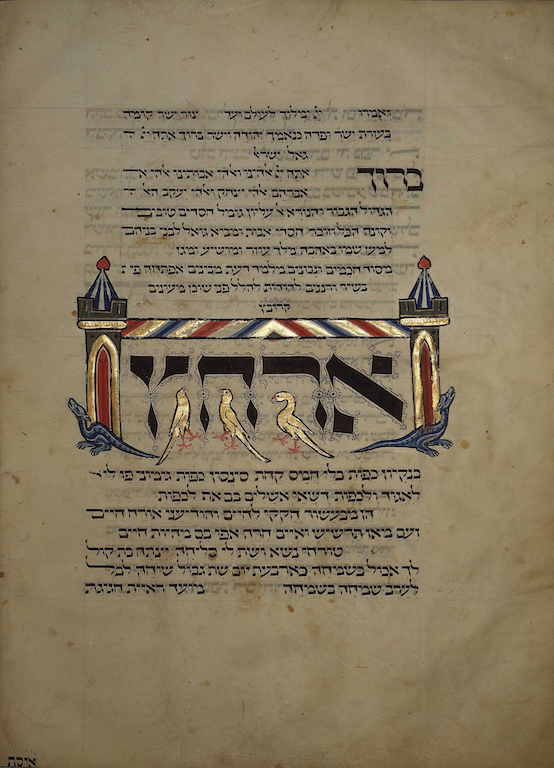 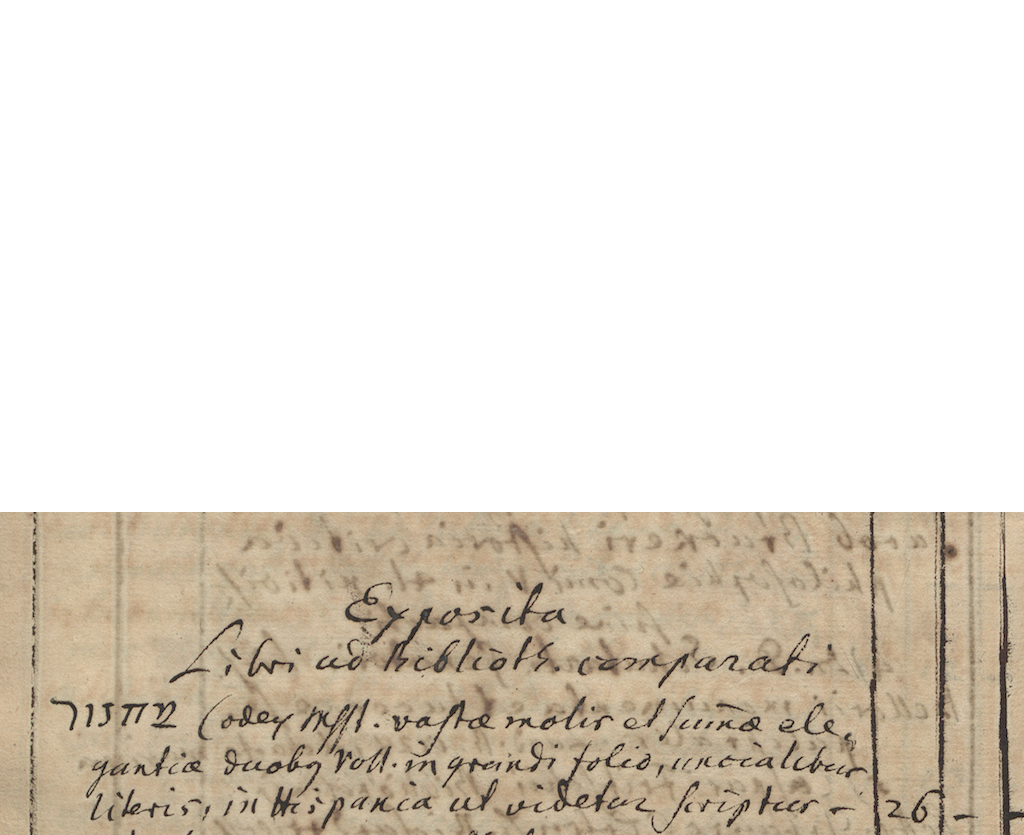 Fig. 2 – Excerpt from the acqusitions book of Leipzig University Library 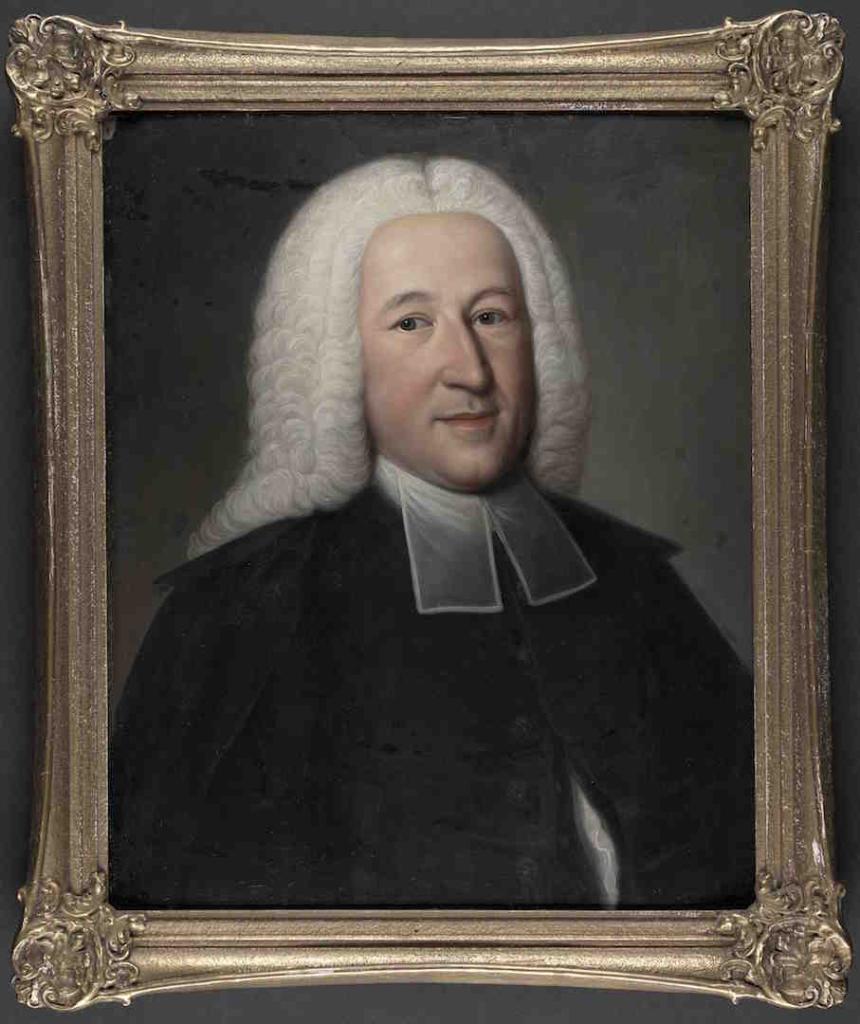 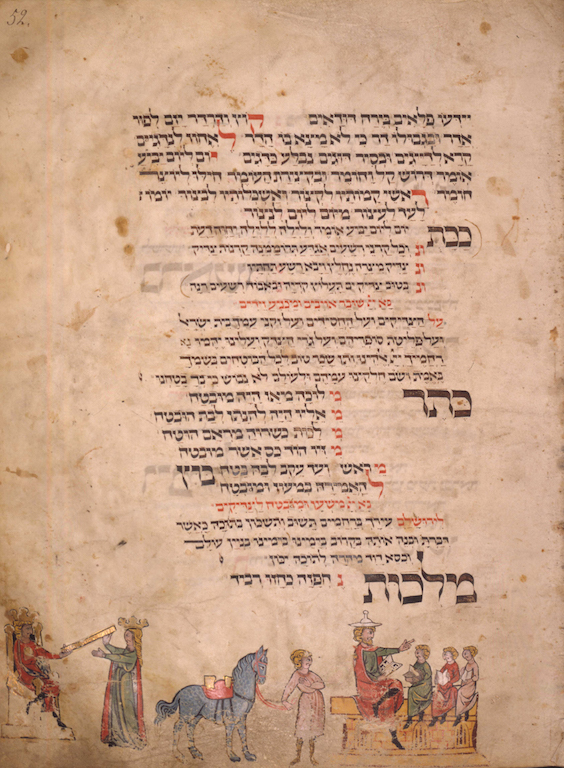 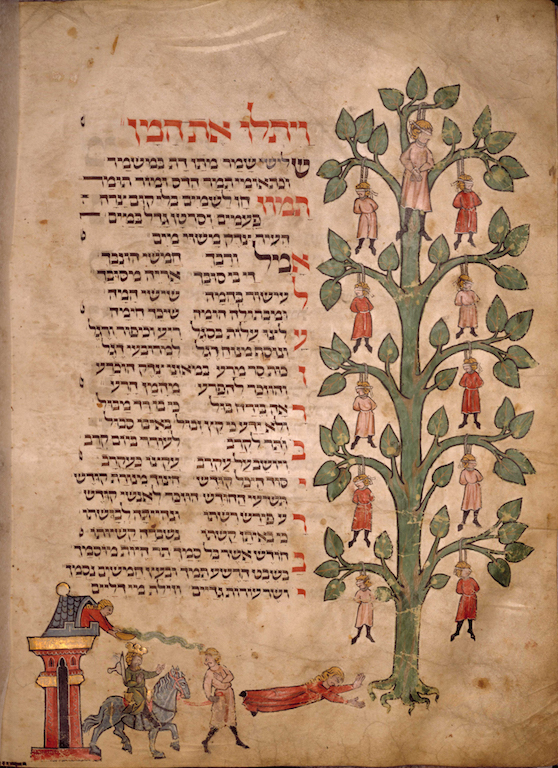 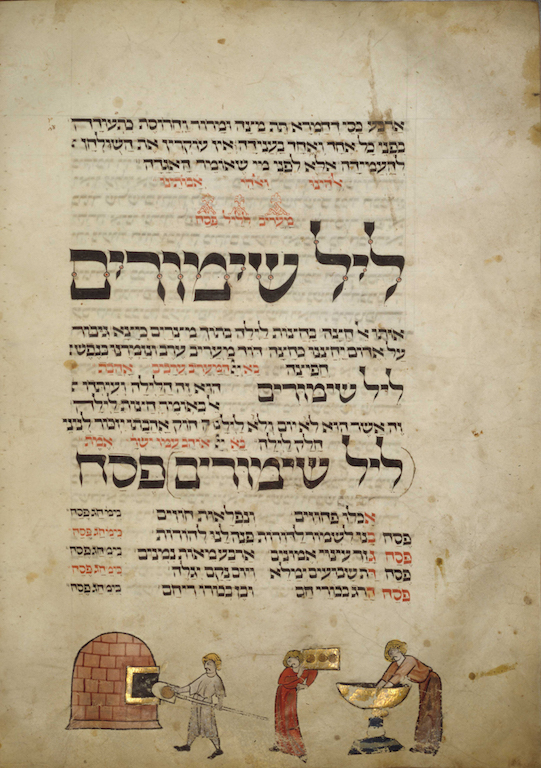 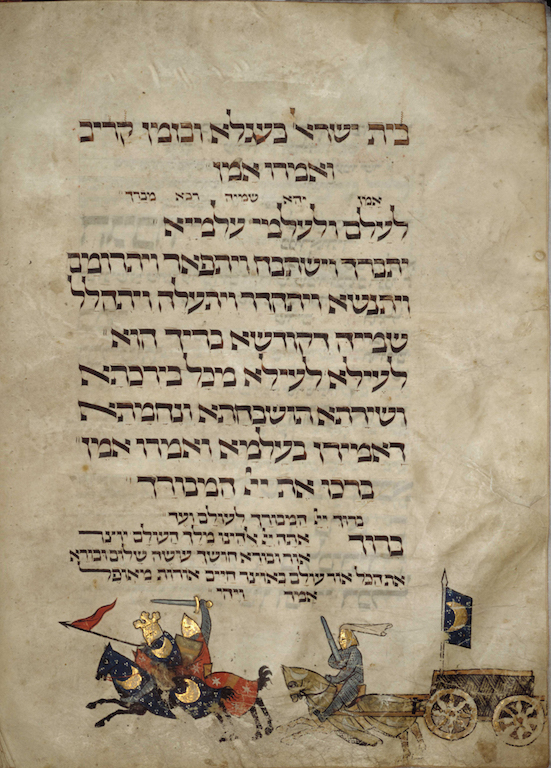 Fig. 8 – Volume 1, 72v: The prosecution of the Israelites by the Egyptians – Passover 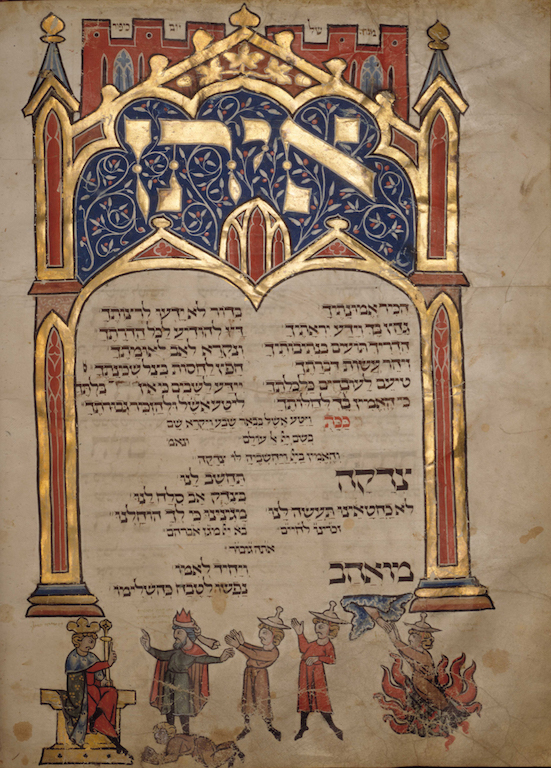