Richly adorned with gilded letters, this work was commissioned in 1307 in Bagdad by the Mongol Sultan Öljaytü. Given to the Leipzig council library by publisher Johann Friedrich Gleditsch in 1694, it has been kept in the university library since 1962.

The leaf (Slider, Fig. 1) is formed into three parts. In the upper gold cartouche the Quran verse 3 of Surah 57 is written. The middle frame shows verse 134 of Surah 2 in bands of clouds on a background with floral tendrils. The bottom gold cartouche contains the sentence: “And He (God) let the noble prophet convey it”. Underneath that is marked in small black script that the manuscript was produced in Baghdad in the 706 Hijra, i.e. in Christian reckoning the year 1307.
During the time of production, when it was common to produce monumental Qurans, this with measurements of 73 x 50 cm is the largest. This is proved not only by its dimension,s but also by its balance, in which the calligrapher filled the breadth of the leaves with giant letters that all the same appear to be slight. Only five lines, written in alternating black and gold tint, are located on one page. The purchaser of this manuscript is named on the splendid entry page; he was the Sultan Muhammad Hudabande Öldscheitü (also Ülǧāytü and Öljaytü, died 716/1316).
The Quran of Öldscheitü was written by a student of the famous calligrapher Yaqut al-Musta'simi (died 1298).

The age of monumental Qurans

In the 13th century the Muslim Dynasties in central Asia were conquered by the Mongolians and their lands were captured. In 1258 the Abbasid Caliphate in Baghdad was ended. The advance of the Mongolian armies came for the first time to its end in Syria. The Mongolian rule did not only mean a political break; the arts and literature began to noticeably change.
Öldscheitü acceded to the throne in 703/1304. Shortly thereafter he already began making preparations for his afterlife and created large instruments for it. A central part of the newly planned city of residence Sultaniyye (today Soltanije in Iran, west of Tehran) which is today still there in the form of a visible mausoleum of the rule with a dome, of which was the largest of the Islamic world for several centuries.
The similarly monumental and prestigious Quran was commissioned in Baghdad and begun at latest in the year 705/1306. The work was conceived as a 30-volume edition, corresponding to the established portioning of the Quran into 30 readings for every day of Ramadan. The Quran is a testament to the conversion of the Mongolian lords to Islam. The Christian born Öljaytü took on the new religion after the example of his brother.

The way to Leipzig

How did one of the most splendid surviving Arabic books make its way to Leipzig? There are only a few sure clues. A small notice at the beginning of the volume reports that the Leipzig bookseller Johann Friedrich Gleditsch (1653-1716)- together with a talisman of a described dress- gave it to the City Council Library.
The surprising quantity of near eastern manuscripts in the Leipzig City Council Library came there thanks to the fact that in earlier years large quantities of manuscripts came from battlefields and conquered cities of southern Europe. Saxon troops were some of the first to storm the camp besieging Vienna of the Ottoman Grand Vizier in 1693. There such a princely book could have been captured and taken home by a Saxon soldier.
Further pieces of the formerly 30-volume commissioned work came into Dresden’s court library, as well as spoils of war. Already in the early 16th century other pieces of the Baghdad Quran also made their way into Constantinople, the center of the Ottoman Empire, where today three volumes are held. These manuscripts could also have been obtained via military action, but also could have come to the Ottoman court as diplomatic gifts.
Finally, the destination of the Quran, the mausoleum of its sponsor, must have been given the rest of the Baghdad Quran. From there it was stored in the king’s library in Copenhagen. A double leaf, which was a souvenir of the former Leipzig student and Near East traveler Adam Olearius (1603-1671), came to the library via this student. Olearius was a member of the embassy at the Persian court and described the Quran in his travel in the year 1638.
The large part of the manuscript is lost or currently still not found.

The Leipzig Baghdad Quran appears at first glance to be a monolithic masterwork, but is in reality a collection of fragments. The formidable ruins of Öldscheitü’s mausoleum stand today in the same way the still conserved pieces of the Baghdad Quran: as a glimpse of grandeur, that shined only for a short time and was never fully completed. Also, as suggested by the order for the book- that a complete 30-volume copy of the Quran should be sent to the mausoleum of the donor- and as the leaves in Leipzig show in their finely worked composition, the other pieces indicate an entirely different story. Already in the Leipzig volume there are holes in the text. Here someone appears to have bound together what was possible to be saved.
Still clearer, the partially uncompleted implementation of the leaves in other libraries emerges. There in a few pieces the ambitious cartouches (framed pieces of text) the headings for the Surahs or the ornaments fitted on the edges for the display of the verse numbers are missing; in other fragments the gold tint of the workable text was not fully completed, as only the outlines were written. In some cases both are missing.
The unfinished condition of the book allows for an interesting look into the creation of this complex masterpiece. The beginning of the text was not fully completed, as well as later pieces. The unfinished fragments kept in Dresden show that earlier pieces of the text were allowed to be left unfinished. The conserved pieces are probably proof of parallel work in a workshop.

Gift text (Translation from the Latin; Slider, Fig. 2):
This highly valuable codex on account of the highly valuable script, together with a flaxen dress that is adorned with signs, Arabic script, and geometric figures, was given by Johannes Friedrich Gleditsch the bookseller and merited scholar of the humanities to this library together with two extraordinary Turkish amulets on the 9th of May 1694.

The binding (Slider, Fig. 3) was probably finished at the end of the 16th or 17th century in Istanbul. In this time overhanging decorative technical things were in fashion, which the binding used as projected areas of extravagant opulence. With a deep printing technique, impressed stamps with inlaid filigree often filled the whole area of the binding and the inside cover, and were extensively inlaid with gold or gorgeously painted. All things considered, the conservative two dimensionality of the black leather dominated, on which the interplay of almond shaped middle ornament with four corresponding corner ornaments took place; these were bound together with bands of clouds.
Not every one of the surviving fragments has been maintained in such an undamaged form as the Leipzig volume. The Dresden and Copenhagen leaves are heavily trimmed.

While the outer cover corresponds to a classical Ottoman model, the bookbinder chose a highly unusual form for the inside cover (Slider, Fig. 4). In the middle of the red-brown leather adorned with very fine lines, three square stamps printed over one another are located with a script identified as “Quadrat-Kufi”. This monumental script often used for stone inscriptions was common in central Asia and Persia during the Turkish and Mongolian dynasties from the 13th to the 15th century. The Islamic confession of belief of the Sunnis- “There is no God but God and Mohammed is his Prophet”- is in the middle piece, while the two smaller, attached stamps respectively write out the name ‘Ali from a middle point to four corners. This son-in-law of the Prophet Mohammed is counted as the fourth chosen Caliph and to the Shiites he is the first Imam. This combination of stamps appears therefore especially fitting for a Quran whose commissioner converted from Sunni to Shia Islam during its production. Similar inscriptions with the name ‘Ali repeated four times in Quadrat-Kufi are found on the mausoleum of Öljaytü.

The many Quran copies prefix a request that only the immaculate could touch copies of this book; often it was a reason for very pretty design, as here on the double page (Slider, Fig. 5).
Over and below the gorgeous illuminations the entry is clearly fitted in smaller script, which identifies this book as an endowment of the Sultan Öldscheitü to his mausoleum. Such designated endowments should guaranty their status as “waqf”, so that the endowment ideally could fulfill its goal until the end of time and therefore not at last be kept in memory of the life of the endower. However, the fate of the early dispersed Baghdad Quran shows how little such endowment aims orient reality.
Clear to see in the middle of the page is the line on which the first leaves of this volume were first folded together. It seems as though the still unbound work was already stored in its place origin in fragments and in different forms.

Balanced around the whole Quran text in order to distribute them to the 30 volumes and possibly to organize in parallel working writers, gilders, and illuminators in one work shop, the writer or writers followed an exactly calculated plan. The largest of the letters as well as the technique, which changes with every line, required great concentration to execute writing in black ink or black outlining of the letters with subsequent gold fillings. The many inattentions of the writer throughout are therefore astonishing. Many omissions were amazingly marked by the editor of the copy and were appended to the edge of the text (Slider, Fig. 6). Not rarely one can see the writer at the end of a line combined letters and pressed words together in the smallest of spaces.
Uncountable medallions fitted to the edges are found throughout the whole book; every fifth and tenth verse is displayed by them. They unfold an almost unending richness of forms: in circles and drops, filled with rings, ovals, and blooms as well as many different geometric and floral patterns, not one of these ornaments is the same as another. 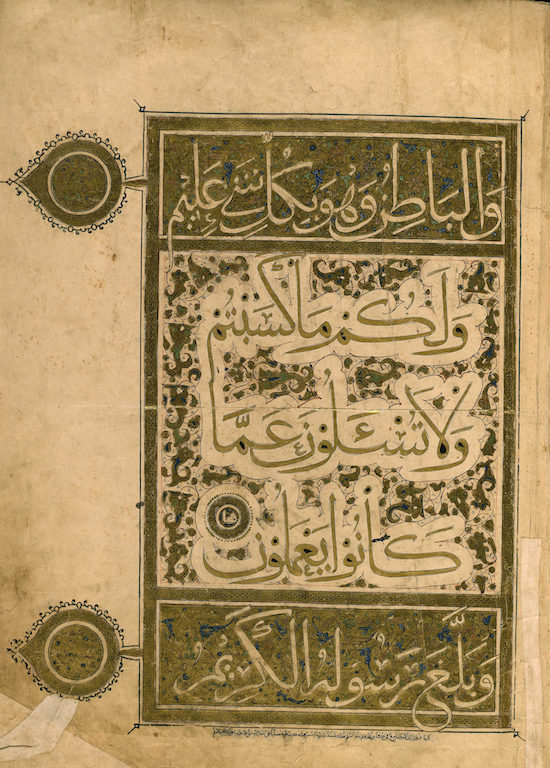 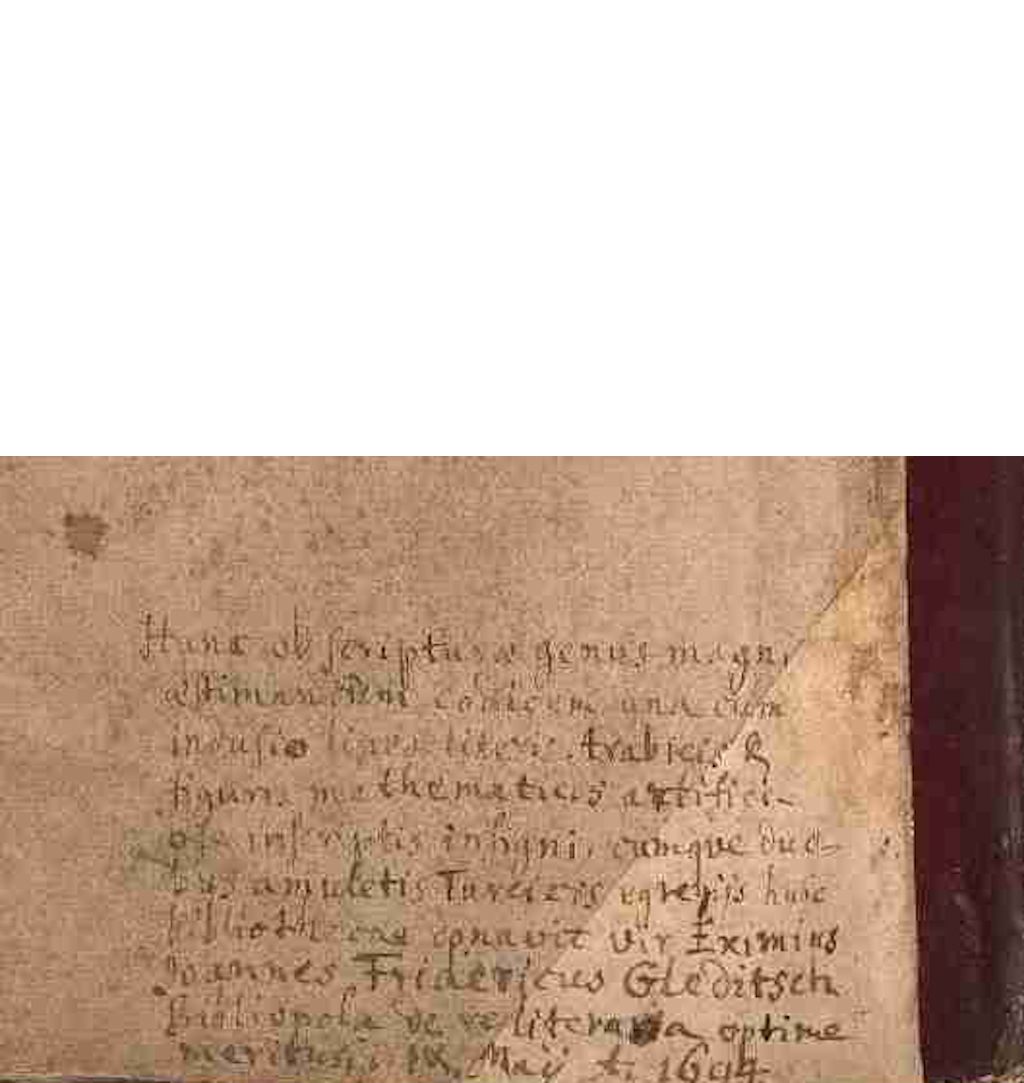 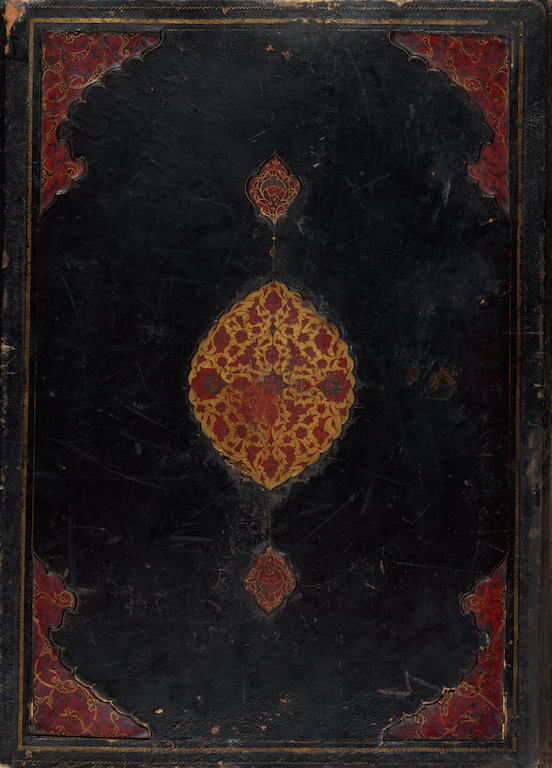 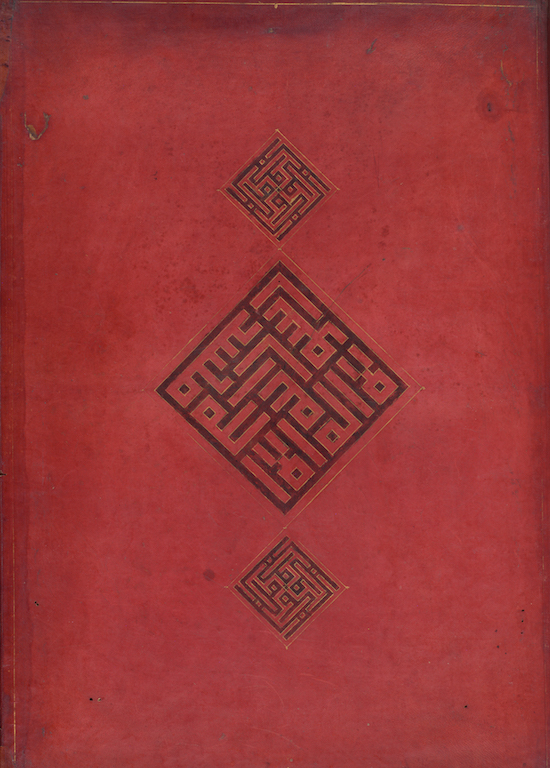 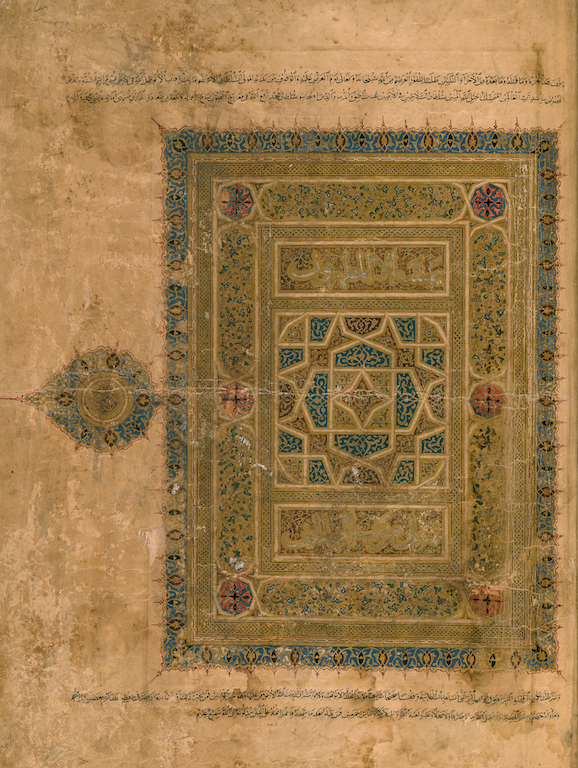 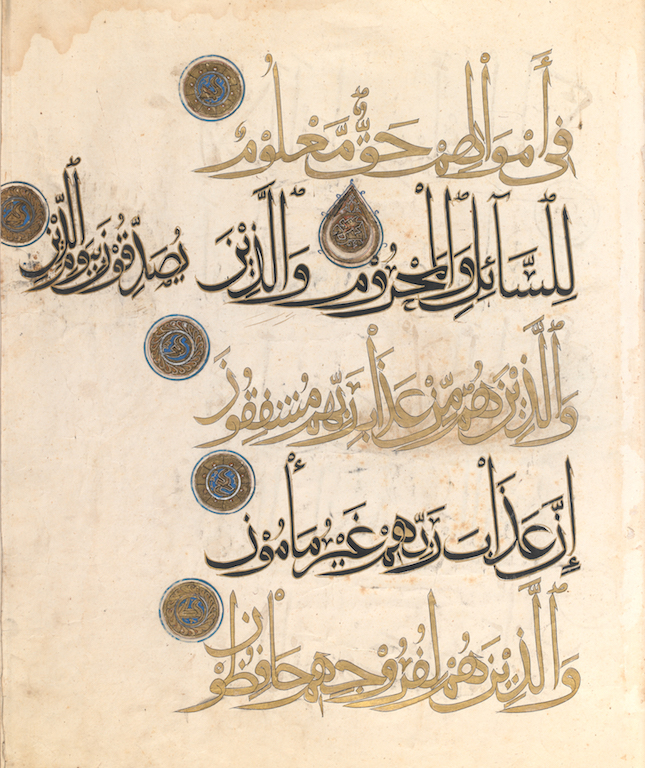