The ten volumes of the Flora Graeca (Oxford 1806-1847) are today among the most valuable items of a collection of plant books which Rudolph Benno von Römer (1803-1871) bequeathed to the university library. Over the centuries, it has acquired several hundred scientific collections.

The picture (Slider, Fig. 1) shows stavesacre (Delphinium staphisagria L.), a poisonous plant that is common in the Mediterranean area. Stavesacre was already known in Antiquity and was valued as a medical plant. The alternative German name 'Läusepfeffer' (lice pepper) and 'Läusezahn' (lice tooth), as well as the alternative English name 'licebane,' point to its usage against lice.
The picture appears in a ten volume English work about plants from Greece, produced after long years work with strict criteria for accuracy. The 'Greek Flora' (Flora graeca) was published in Oxford between 1806 and 1840. It was ordered and paid for by John Sibthorp (1758-1796). The financing of the print was secured in his will. Sibthorp had traveled to Greece in his youth together the Austrian plant illustrator Ferdinand Bauer (1760-1826). Bauer drew 1,000 colorful drawings which served as models; he also organized the printing process of Flora Graeca, which as a work of print also is a collection of hand painted plant illustrations. The very small total circulation of less than 30 copies makes the Flora Graeca one of the most precious botanical works of the 19th century.

Rudolph Benno von Römer (1803-1871; Slider, Fig. 2) was a Saxon manor lord and also an avid collector. From 1836 to 1864 he served as a representative in the Saxon state parliament.
As a young man, Römer studied at Leipzig University where he took courses in Botany, among others. The special collections of the university library include two of his notebooks from the years 1822/23 and 1823/24. Most likely the friendship of the student Römer with the professor of botany Gustav Kunze (1793-1851), ten years his senior, began in this time.
Römer became a collector of over 2,000 highly valuable plant books, including the Flora Graeca, on account of his interests in botany. At the end of his life he turned out to be a generous donor. It is probably due to his friendship with Gustav Kunze that the university library was given this collection of plant books. Already in 1859 Römer had determined in his will that his botanic library along with his other books and the Herbarium, as well as his collection of autographs would go to Leipzig University, along with a significant sum of money.
Together with the medical book collection of Johann Carl Gehler, received in 1813, and the library of botanist Gustav Kunze, bequeathed in 1851, the plant book collection of Römer made the Leipzig University Library one of the best libraries for botany and its related disciplines in the 19th century.

(Slider, Fig. 3) The holdings of the university library grew until late in the 19th century mostly by way of receiving private collections. Ever since the 18th century the inflow of private collections climbed steadily and reached its highpoint in the late 19th century. Private collecting is goal oriented. For the library the acquisition of private collections was a singular possibility to specify its holdings.
The planned acquisition of private collections assured the preeminent significance of the university library's possessions. Three examples can make this clear: historical literature in Slavic languages, Chinese printed books, and botanical books. The collections of printed books in Slavic languages are based on the acquisition of the library of the professor of Slavic languages at Leipzig University, August Leskien (1840-1916). In 1917 the University Library bought Leskien's library with around 16,000 volumes. This was the basis for a special collection of Slavic literature. There was a similar development for Chinese printed books. By taking over the library of the professor of east Asian languages at Leipzig University, Wilhelm Grube (1855-1908), and the private library of the Berlin Tibetologist Hermann Franke (1870-1930), the third largest Chinese collection in Germany was established in Leipzig. Finally the gift of the botanical library of Rudolf Benno von Römer (1803-1871) facilitated the creation of a collection of rare natural history books.
Besides thematically aligned collections there are individually oriented collections from bibliophiles, like the Goethe collection from the Leipzig publisher Salomon Hirzel (1804-1877). With this collection the University Library holds the largest number of writings from Goethe himself, outside of Weimar. Further special collections include the Ibsen collection of the American journalist Henry Louis Mencken (1880-1956), which alongside editions of Ibsen's works and letters also contains documents of performances of Ibsen's plays in the USA. Also worth mentioning are the collections of Faust material from Julius Bode (1812-1892) and the Hermann Hesse collection from Wilhelm Theil (1877-1962) with first editions, letters, dedications, and drawings by the author. A more recent example of a private collection is that of the Wustmann family, which came to the university library in 2011 and documents the life of Leipzig's bourgeoisie in the 18th and 19th centuries.

Bill of fare from the Mencken Collection, 1891 (Slider, Fig. 4)
[Ms 2847:14]
The German-American Henry Louis Mencken (1880-1956) was a descendant of the old Leipzig Mencke family of scholars. His considerable collection of Henrik Ibsen und his works came to the university library in 1928. It contains editions of Ibsen's collected works and letters. There is a special emphasis on translations that document the worldwide importance of Ibsen's works. The collection also contains two autographs from Ibsen, a large collection of essays, newspaper clippings, individual pieces, reviews, excerpts, posters, bills of fare, letters from actors, and documents about Ibsen's son Sigurd (1859-1930).

Georg Kestner in his study, 1887 (Slider, Fig. 5)
[Slg. Kestner/1/1/3]
The Kestner Collection is its own cosmos. Roughly 40,00 original documents from the late middle ages until the late 19th century from all parts of the Western world were compiled by Georg Kestner (1805-1892), including around 4,000 portrait engravings as well as numerous accompanying documents, especially historical prints, friendship books, and newspaper clippings, which he bequeathed to the university library. After he retired in 1865 he relocated to Dresden to be a private scholar. The photograph shows Kestner in 1887 in the study of his residence while he works with his collection. On the table are a few boxes of his collection.

Alfred Brehm: Album leaf, March 22, 1884 (Slider, Fig. 6)
[Slg. Nebauer/W/A-Da/W67]
Brehms Tierleben (Brehm’s Life of Animals) is known even today as a byword for popular scientific zoological literature. Alfred Brehm (1829-1884) noted in the album of an unknown owner on March 22, 1884, the motto 'zoology is a contribution to the study of humankind.'

Johann Wolfgang von Goethe: Landscape drawing, before 1814 (Slider, Fig. 7)
[Slg. Hirzel, B 336, Bl. 1a]
The Goethe Collection of the Leipzig publisher Salomon Hirzel (1804-1877) was known worldwide already in his lifetime. Johann Wolfgang von Goethe (1749-1832) was probably the most venerated German author of the 19th century. The handwritten works of the master were appropriately coveted. Only with considerable financial expenditure was Hirzel successful in compiling the collection. The drawing of a landscape is one of five sheets with landscape drawings dated before 1814.

Postcard from Richard Strauss, Garmisch, June 10, 1927 (Slider, Fig. 8)
[Kurt-Taut-Slg./1279/Nr. 61]
Richard Strauss (1846-1949) was one of the most famous composers and conductors of the late 19th century and first half of the 20th century. The autograph collection of Kurt Taut, director of the Peter Music Library, contains a large number of musician's autographs. On this postcard Strauss wrote a short note to the Leipzig bandmaster Otto Singer (1863-1931). On the back side there is a photo of Strauss' residence in Garmisch. Visible in the foreground are Richard Strauss and his wife Pauline Maria de Ahna (1863-1950).

Archives in the Leipzig University Library: Information on the website of the library 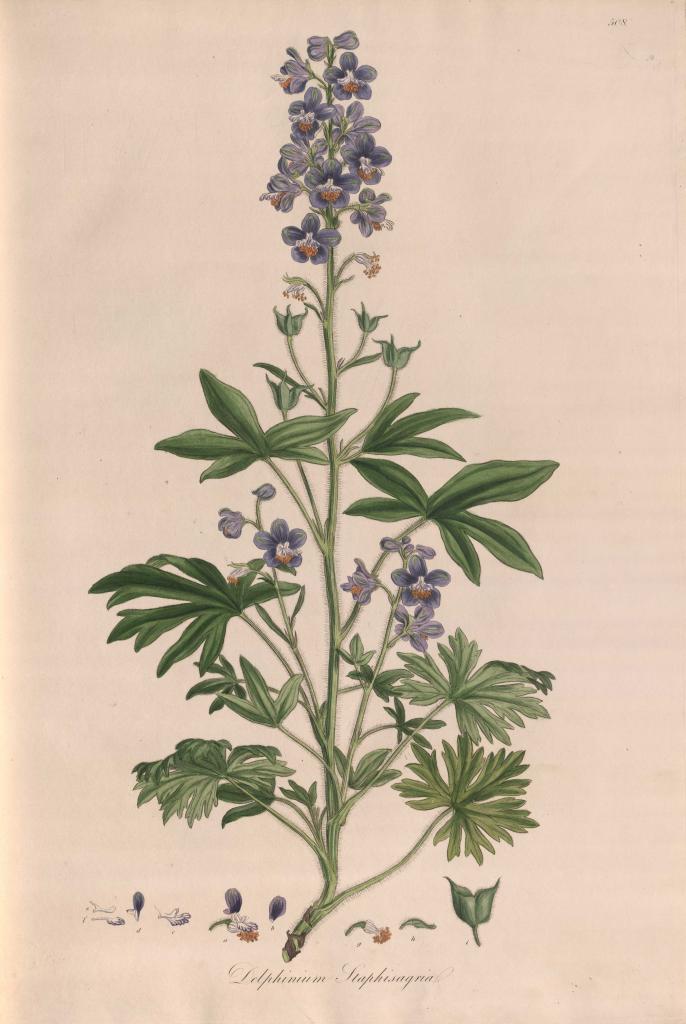 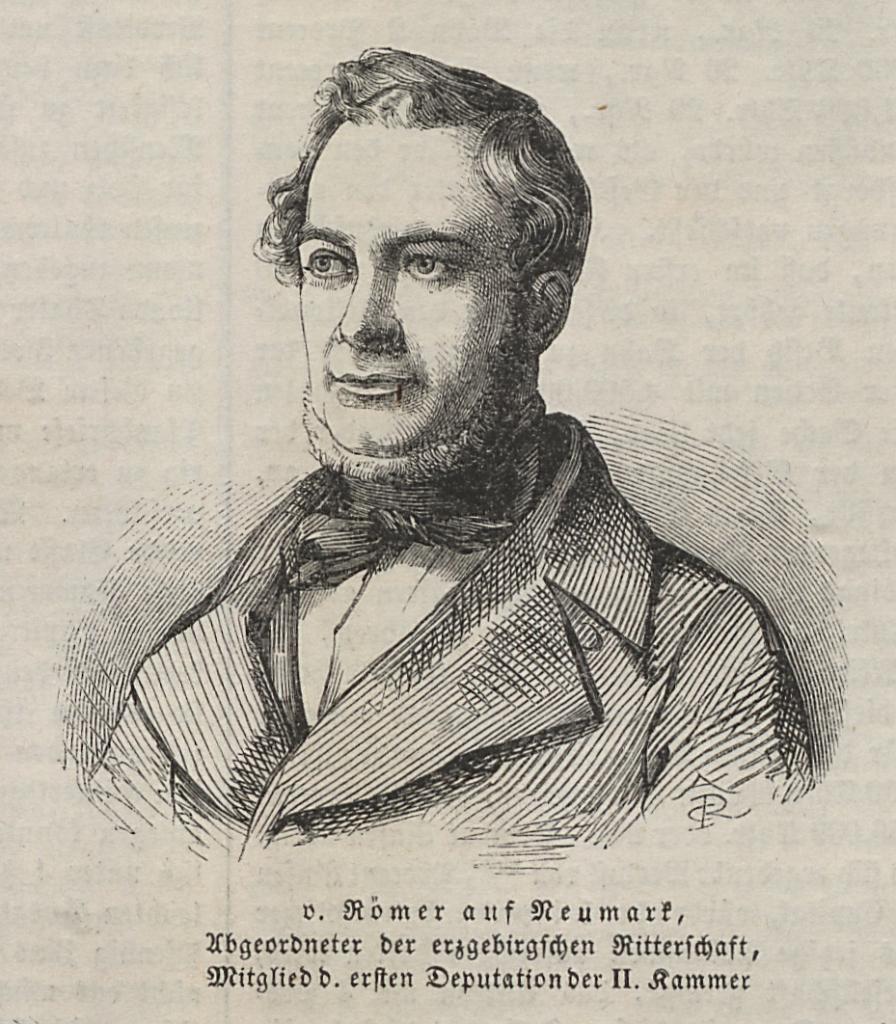 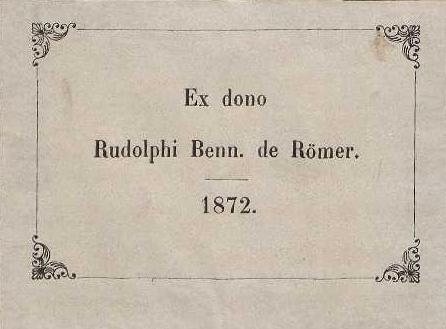 Fig. 3 – An Exlibris (literally 'from the books of ...') in the book itself (most of them on the inside cover) from Rudolph Benno von Römer indicates the former owner and collector. 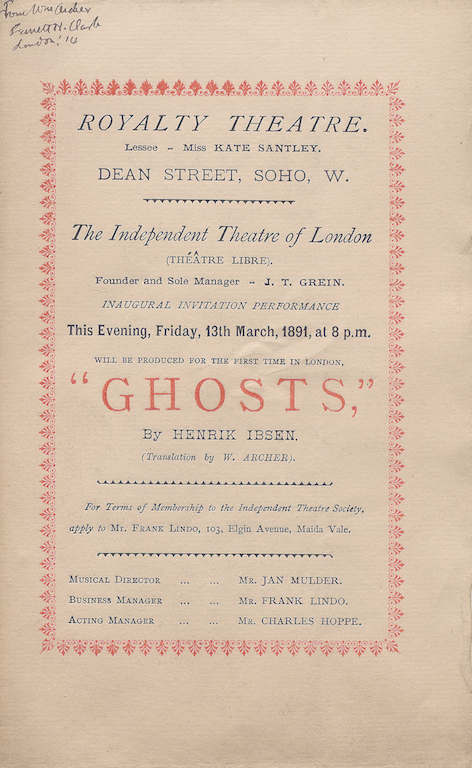 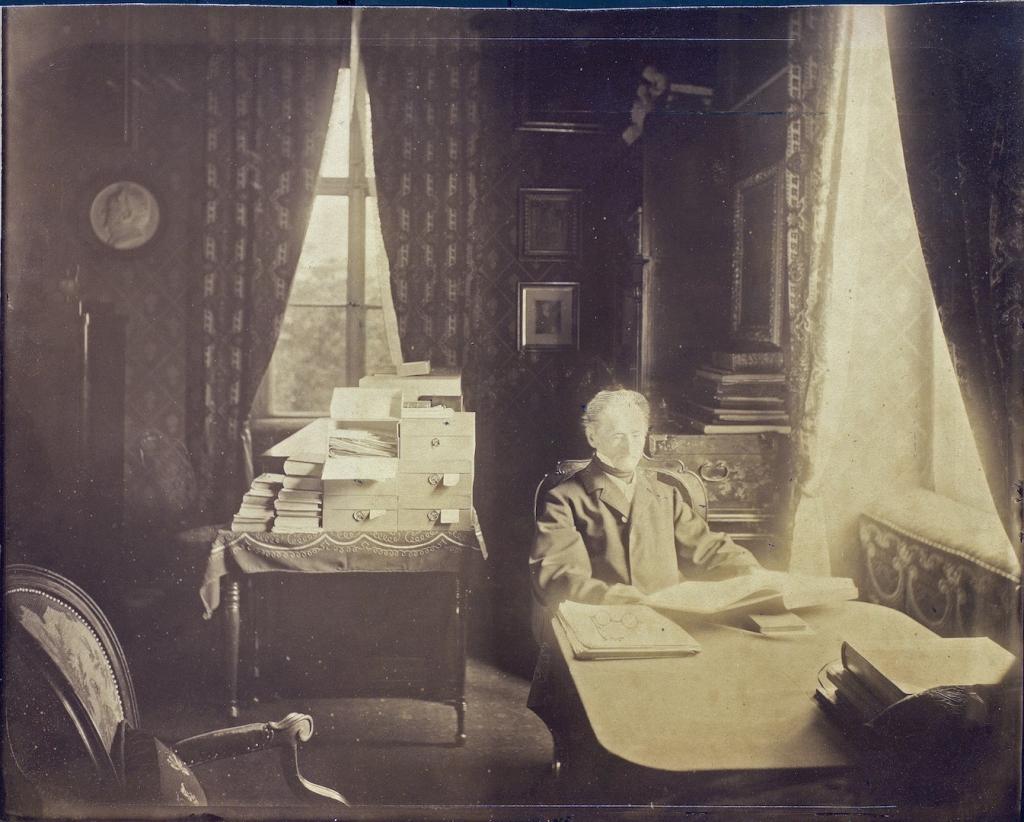 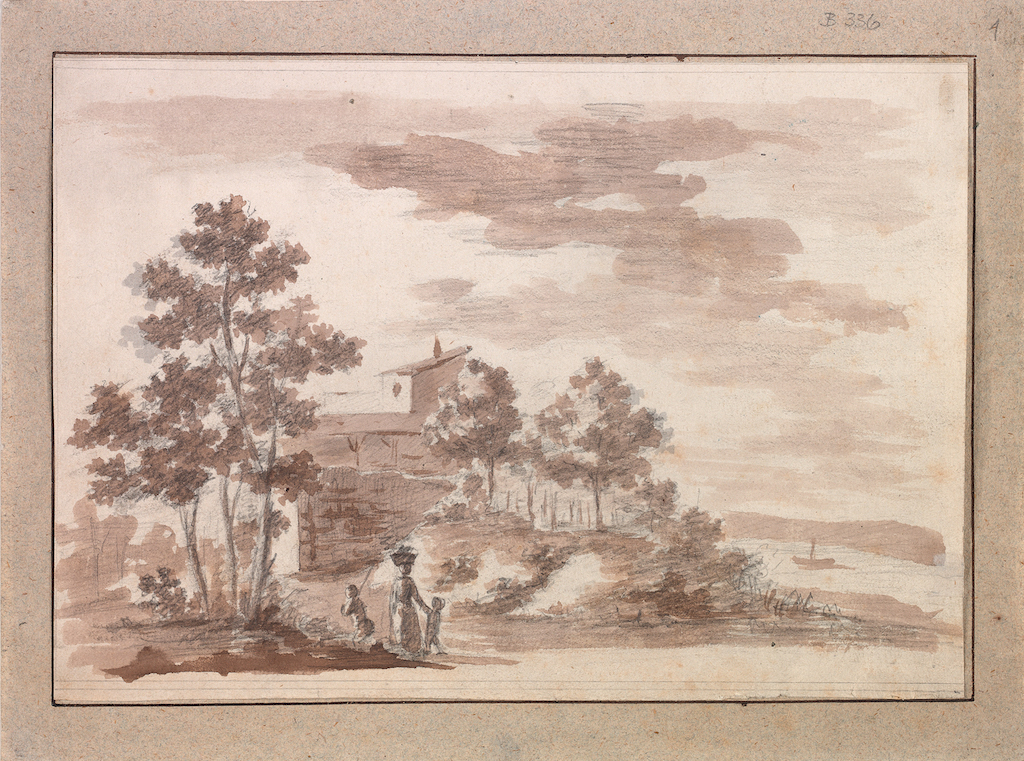 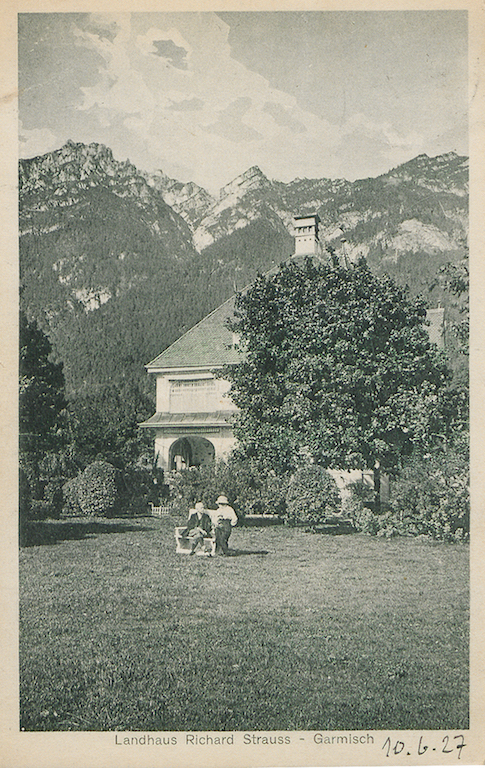