New library building 1891 (Slider, Fig. 1 upper) │The university library was given a new building designed by architect Arwed Rossbach on Beethovenstrasse where the university's botanical garden had been. Built in the Neo-Renaissance style and lavishly adorned inside, the building was named Bibliotheca Albertina after the ruling king Albert of Saxony.

Moving books (Slider, Fig. 1 lower) │Inside, the library functions as a logistics center: Books are delivered and transported for further treatment (photo from 1930). Around 1900, with regard to the holdings and the budget, the university library was one of the biggest academic libraries in the world.

Historical Reading Room (Slider, Fig. 2) │ The reading room provided 130 places; a gallery for reference books was added in 1925 (photo from 1930). Additional places to work at were offered in a separate reading room for periodicals.

Saving the books 1944 (Slider, Fig. 3) │During the Second World War, Leipzig was bombarded several times. After a major attack in 1943 the university library was cleared of books entirely (photo from 1944). Most items were kept safe in the understructure of the Monument to the Battle of Nations; precious items were put in cellars around Leipzig.

Destruction 1945 (Slider, Fig. 4) │ In April 1945, bombs destroyed the middle part of the university library, as well as most of its east wing (photo from 1946). The remaining building was used for a provisional functioning of the library.

Staircase in the open 1991 (Slider, Fig. 5)│The reconstruction (1992-2002) of the Bibliotheca Albertina was requested since 1957; however, financial resources were made available only after 1990. The reconstruction created a more functional building. The central staircase leads again to reading areas which were – like the stacks – considerably augmented.

Max Arwed Rossbach (1844-1902; Slider, Fig. 6) studied architecture at the Royal Art Academy in Dresden, where he became familiar with the work of Gottfried Sempers. In 1871 he moved to Leipzig, where later many of his building would stand. Alongside the new construction of the University Library on Beethovenstraße (1888-1891) he was also responsible for the remodeling of the main building of the university at Augustusplatz (1891-1897). Rossbach also built the building of the Leipzig Bank (today Deutsche Bank), constructed from 1898 to 1901 near the Neues Rathaus (New Town Hall), and the Tabor Church in Leipzig-Kleinzschocher, which was completed in 1904. Alongside that he also constructed multiple apartment buildings in Leipzig, like the corner house at Beethovenstraße-Grassistraße.Rossbach was a active in the Leipzig city parliament for many years and was given in 1891 the title of a Leipzig city councilman. He founded the Ostheim associatian, which provided housing for workers in Leipzig-Sellerhausen.

The building in the cityscape (Slider, Fig. 8)
Far right in the foreground: the 'Gewandhaus' (actually the 'New concert house', the second building of this music hall, erected in 1884); far left in the background: the Royal Art Academy and School of Applied Arts (erected in 1890), today the Academy of Visual Arts Leipzig. The freestanding building of the library was ideal for fire protection, but was criticized for being located quite far away from the main building of the university.

The periodicals reading room (today the conference room) (Slider, Fig. 9)
The periodicals reading room was installed in 1930. The photo shows in the background the carpet (2.5 x 3.5 m) created by the painter and handcrafter Wenzel Hablik (1881-1934), which survived the destruction of the war and in the meantime is now stored for conservatory reasons in the Grassi Museum of Applied Arts in Leipzig. After the destruction of the eastern part of the building and the historic reading room this hall was the only reading room in whole library until the 1990s.

Old floor plan (Slider, Fig. 10)
A rolling kind of stairs, which was later not realized, is recognizable in this plan of architect Rossbach as part of the application for the architectural contest that was occasioned to award the construction of the University Library (anonymously coded 'Philadelphos', ca. 1885). Visible also are a row of smaller special cabinets in addition to the large semicircular reading hall with 130 seats.

The old staircase (Slider, Fig. 11)
Quite obvious in this photo from 1910 is the tightly closed character of the old staircase, symbolizing the ascent to knowledge. For the reconstruction completed in 2002 the side walls were broken through in order to widen the foyer.

Employee meeting in 1947 on the destroyed staircase (Slider, Fig. 12)
A staff meeting under director Dr. Karl Buchheim (1889-1982), photographed by an unknown intern probably in 1947. One can see that the bricks were removed from the ruinous parts of the building to support other pieces.

History of the Leipzig University Library 1543-2009 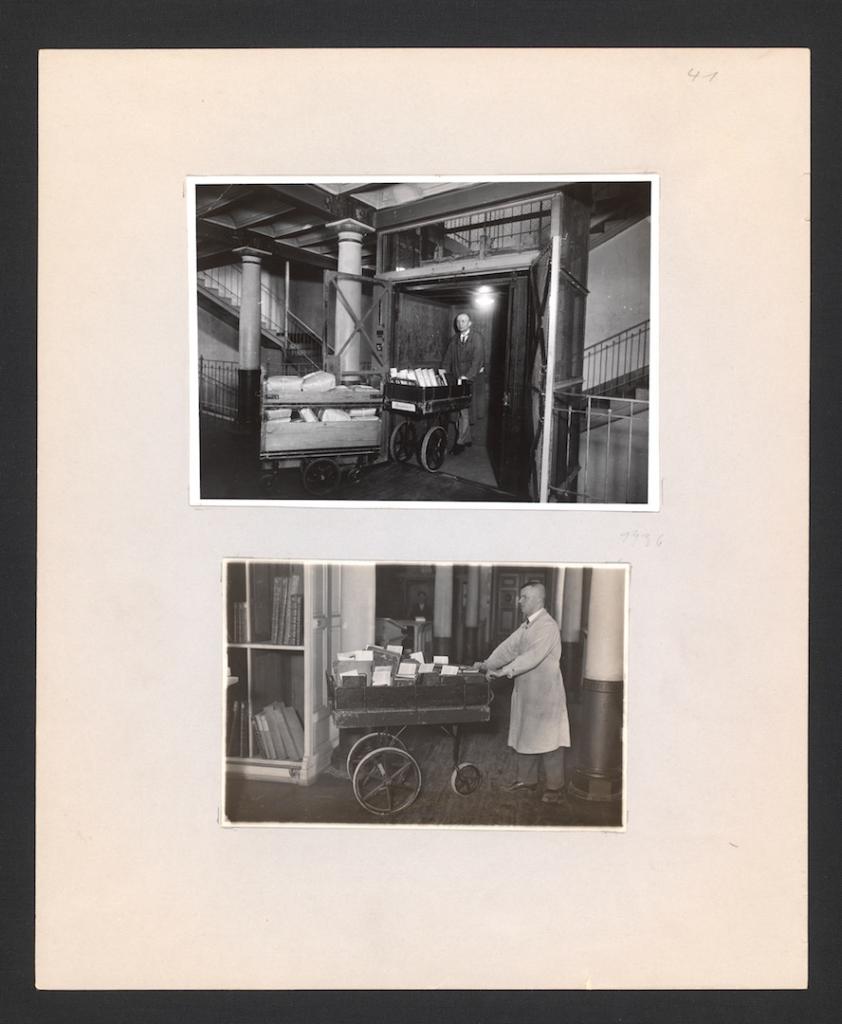 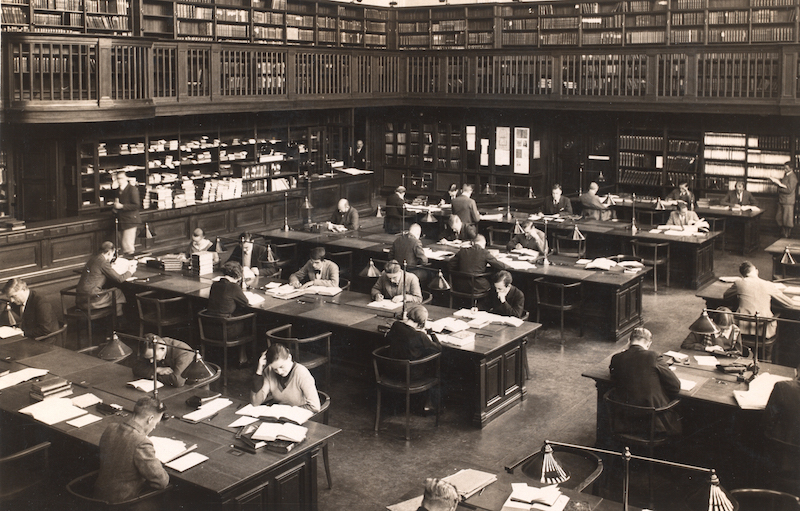 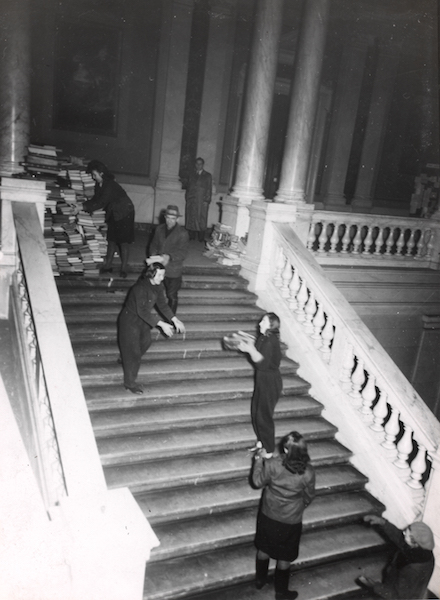 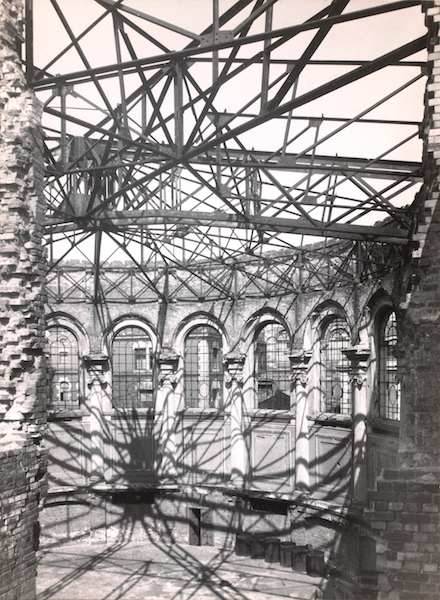 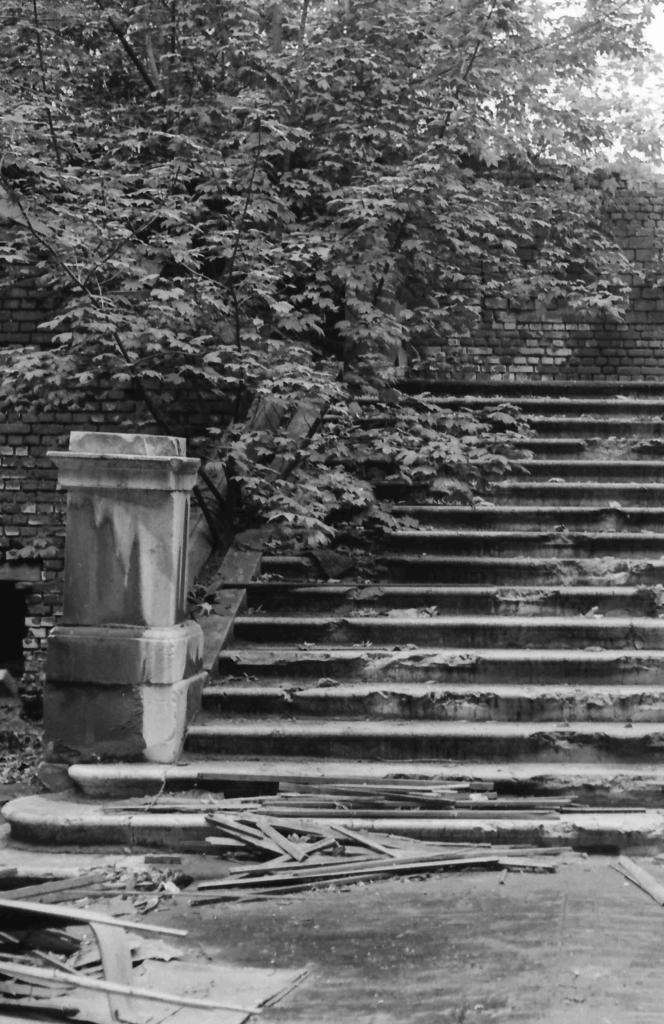 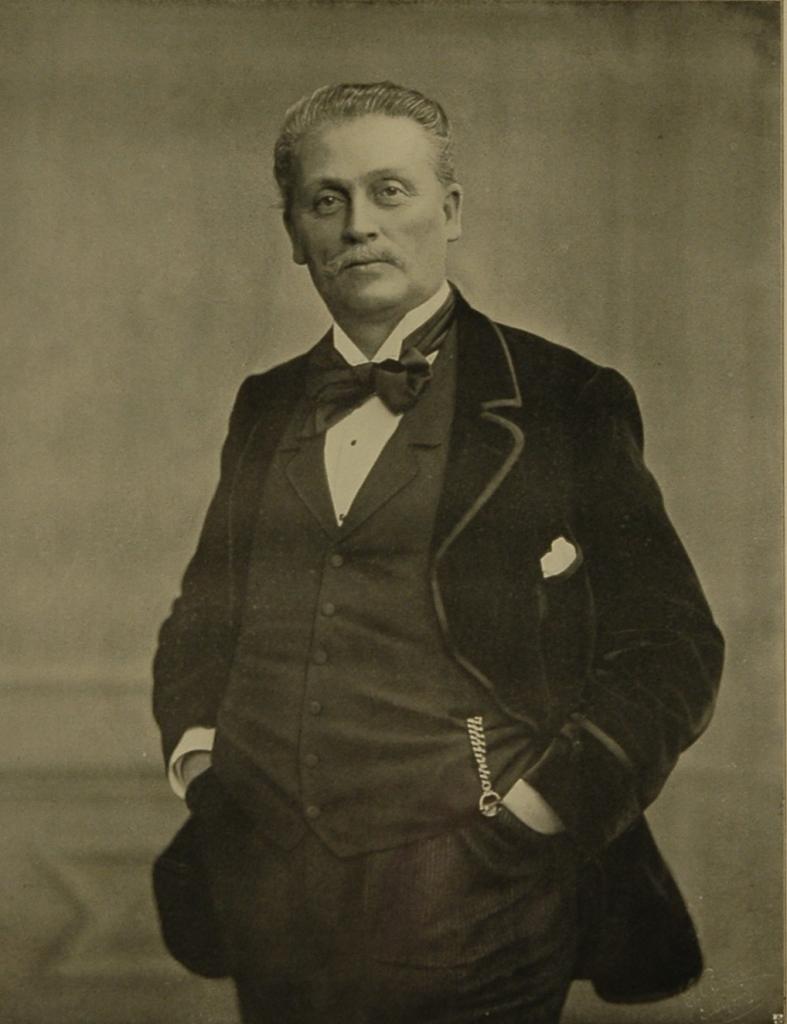 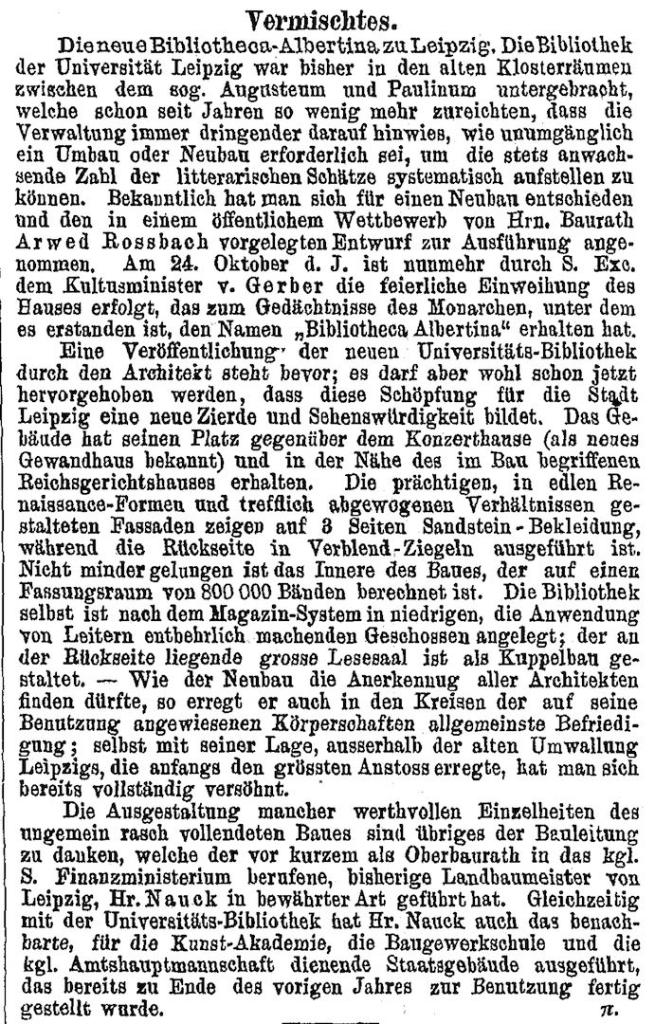 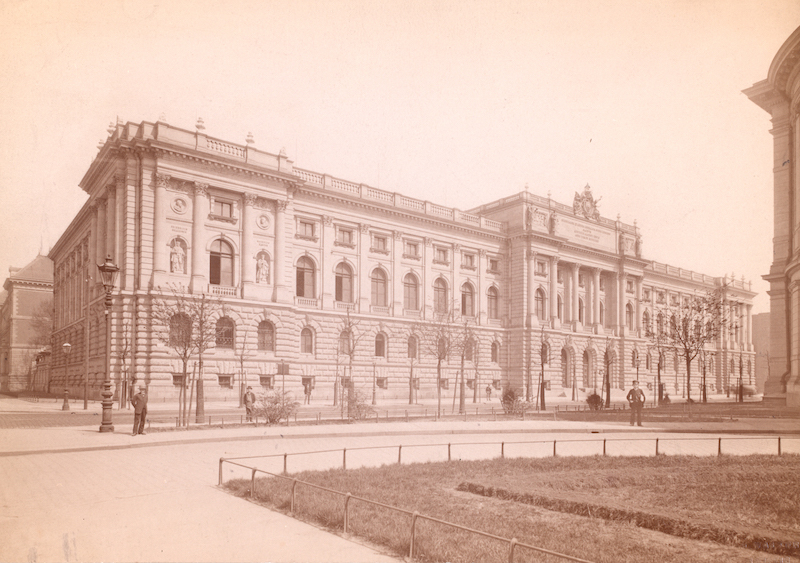 Fig. 8 – The building in the cityscape 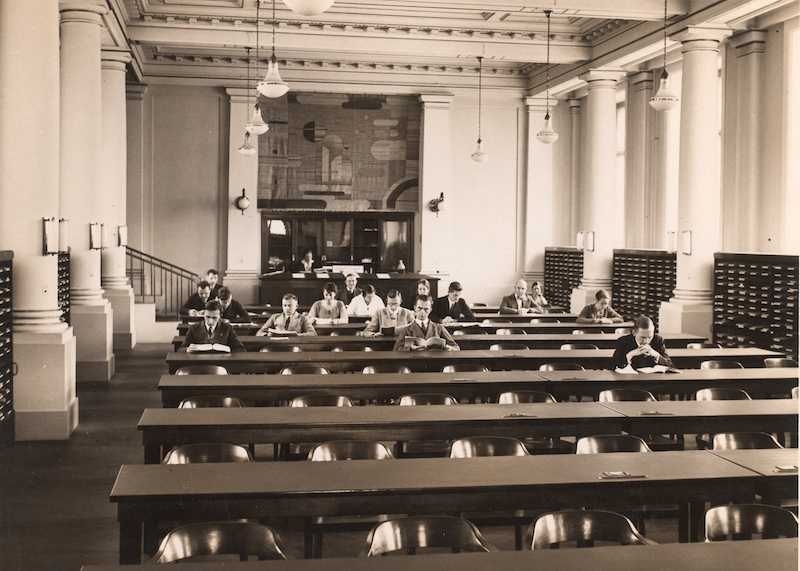 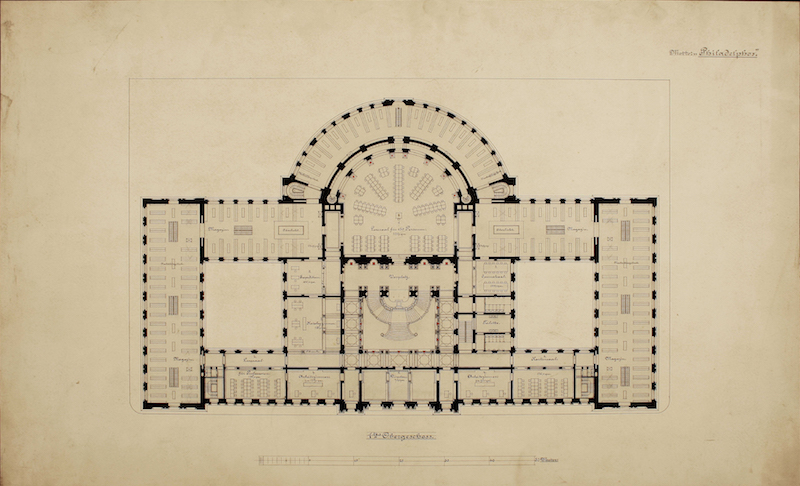 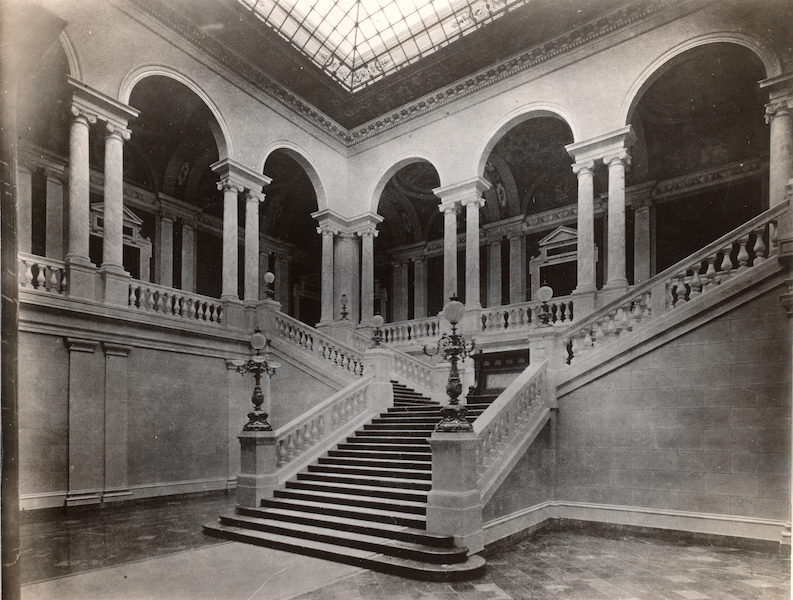 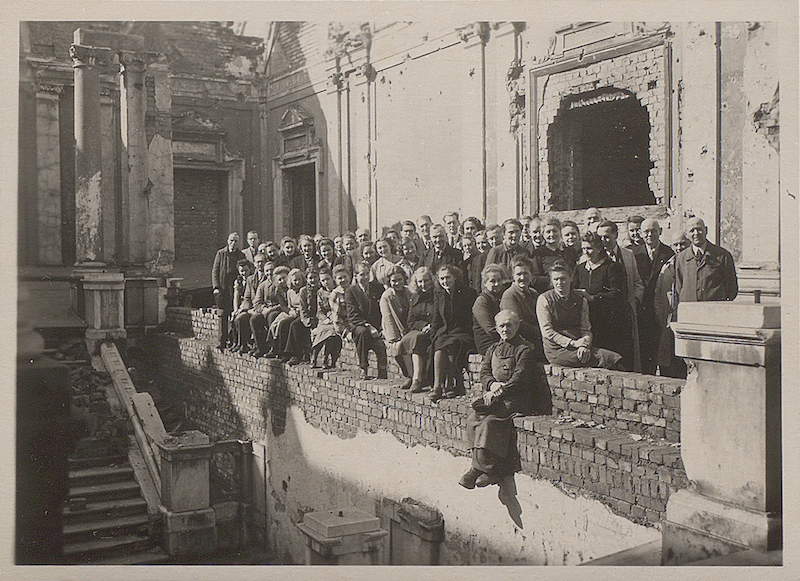 Fig. 12 – Employee meeting in 1947 on the destroyed staircase