Leipzig University Library owns the biggest papyrus scroll devoted to ancient Egyptian medicine and the only one to have been completely preserved. It was acquired for the library in 1873 by the Leipzig Egyptologist Georg Ebers. In 1875, he had a facsimile edition of the text written in hieratic script published.

The entire text complete with translations of all the prescriptions into German and English has been online since 2017. In 2021, a replica of the scroll, which is 18.63 metres long, went on display in a separate showroom in the foyer of Bibliotheca Albertina. (Publication on the Ebers Papyrus showroom, German and English)

What is the Ebers Papyrus?

The Ebers Papyrus is a scroll containing 108 columns of text written in black and red ink. Its origin at the end of the 16th century BCE is verified by both the calendar on the reverse and radiocarbon dating performed in 2014.

The hieratic script reads from right to left. The quantities in the prescriptions are mainly shown in red ink. The entire scroll was probably written by a single scribe. With a few considerable exceptions, the columns are generally about A4 in size. The fact that the scroll was written on the reverse at the end proves that it is complete.

The Ebers Papyrus is one of our key sources of knowledge about medicine in the ancient world. It contains nearly 900 prescriptions and educational texts concentrating on general and internal medicine. It lists about 80 medical conditions, including heart disease, gynaecological matters, intestinal problems, parasites and eye diseases, and also remedies used to treat them such as suppositories, ointments, pills, bandages and enemas. Most of the remedies comprise multiple ingredients: minerals, plant and animal products, and also human and animal excreta.

Prescriptions from the Ebers Papyrus

Another remedy to eliminate white spots in the eyes: “There is thunder in the southern sky in the evening and a storm in the northern sky. A pillar – one of the Four Pillars of Heaven – has fallen into the water. The crew of Ra’s solar barque are driving in their mooring posts while heads have fallen into the water. Who will fetch them, who will find them unscathed? I’m the one who will fetch them; I’m the one who will find them unscathed. I have fetched your heads, I have attached (them to) your necks. I have fastened your cut-off heads in their place. I have fetched you in order to dispel the influence of a god, of a male undead, of a female undead, etc.” These words are to be intoned over the gall bladder of a tortoise ground with honey, which should then be applied to the eyelids. (Eb 360)

Another, second ointment: Mix frankincense, ochre, and gall of goat in equal amounts to create a smooth mixture. Smear it on a bandage and bind the wound. (Eb 433)

Another ointment to treat hair effectively: Grind a donkey’s tooth in honey. Rub the ointment on the head. (Eb 470)

Another remedy to stop sneezing in the nose: Rub dates with pennyroyal mint and apply to the nose. (Eb 762)

These words should be intoned when applying a remedy to any of a man’s diseased limbs. This incantation is superb; it has been tested millions of times! (Eb 1)

The contents of the Ebers Papyrus

The Ebers Papyrus can be described as a handbook of ancient Egyptian medicine.

It contains 879 individual texts presented in 110 columns and covering nine areas of medicine:

Prescriptions 1–6: Spells to be chanted before treatment begins

Prescriptions 603–696: Diseases of the extremities

Prescriptions 854–856: Information about the cardiovascular system

The prescriptions can be categorized as follows:

Healers in ancient Egypt were also doctors, priests and magicians, and represented the realms of science, religion and magic. A holistic approach was applied to human medicine.

Since 70–80% of the ingredients used in the remedies haven’t been identified, recreating ancient Egyptian prescriptions is difficult.

Glimpses of the Ebers Papyrus (Fig. 1–4)

(Slider, Fig. 1) Just how vivid the hieratic script can sometimes be is demonstrated in column 8 at the beginning of lines 1 and 19 by the characters for honey, consisting of a bee followed by a honeypot. In addition, the figure at the end of lines 11 and 16 of columne 9 indicates medicines for treating constipation.

The Ebers Papyrus begins with small, narrow columns. From column 22, the writing is justified, with a new line being started for each new prescription and each ingredient. In addition, the quantities are highlighted separately to the left. The join on the right was glued so neatly that the scribe was able to write over it. The Ebers Papyrus consists of 48 individual sheets with an average width of 40.5cm. In antiquity, they were glued together such that the right sheet lay over the left sheet to make it easy for the scribe (who wrote from right to left) to write over the join.

(Slider, Fig. 2) Column 31 deals with the treatment of pain in the anus and various cures, especially the use of suppositories for a cooling effect. Note how the scribe solved the problem of a passage which had accidentally been omitted. He marked the position in the second line with a red X and inserted the missing text above the column number.

(Slider, Fig. 3) Column 88: It can easily be seen that one chapter has been separated from the others by empty lines above and below it, something which doesn’t occur anywhere else in the Ebers Papyrus. It concerns prescriptions 726–732 dealing with ‘Removing a thorn from the body’ and ‘Remedy when the thorn has been cut out’. There follows a ‘Remedy to cure leprosy’. The last few lines were written more closely together as an addendum.

(Slider, Fig. 4) Numbered 110, this is the last column of the Ebers Papyrus. The text ends ‘Remedies up to recovery’. Comparison with the original pages reveals the outstanding quality of the facsimile produced in 1875, yet is also a painful reminder that some of the columns have been lost.

How did the Ebers Papyrus get to Leipzig?

Georg Ebers (born 1 March 1837 in Berlin, died 7 August 1898 in Munich) travelled to Egypt twice: in 1869/70 with his wife Antonie, and in 1872/73 with Ludwig Stern. It was on his second trip that he bought the medical papyrus scroll which he named after himself in Luxor. While still in Egypt, in 1873 Georg Ebers wrote in a letter to his wife how much he was looking forward to the printed edition of the scroll, which was published in 1875.

A dahabiya (a Nile barque) of the type used by Ebers to transport the papyrus 600 kilometres (370 miles) downstream from Luxor to Cairo. (Illustration from Vol. 1 of Egypt in Pictures and Words, p. 131)

In 1875, Ebers published a printed facsimile of the Papyrus Ebers, thus permanently safeguarding the text, under the title: Ebers Papyrus: Hermetic book about the medicines of the ancient Egyptians in hieratic script. Edited with a table of contents and an introduction by Georg Ebers. With a hieroglyphic–Latin glossary by Ludwig Stern; 2 volumes. Vol. 1: Introduction and text, plates I–LXIX; vol. 2: Glossary and text, plates LXX–CX. Leipzig, 1875. 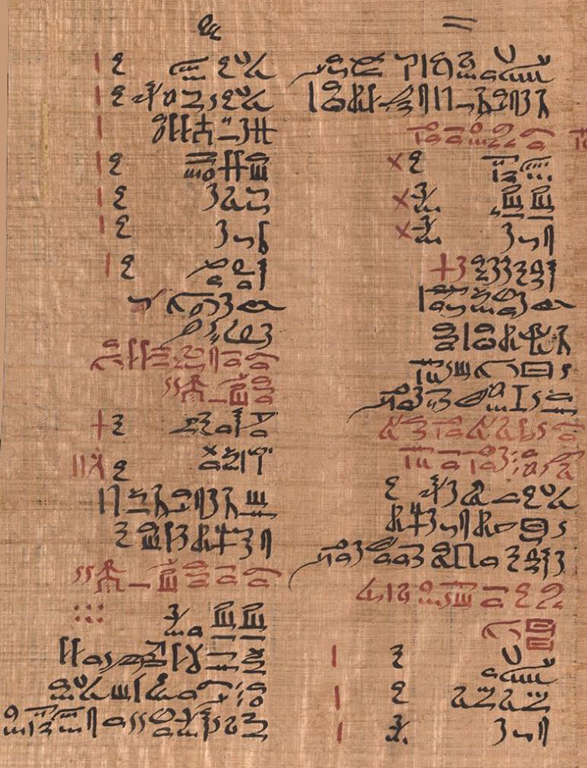 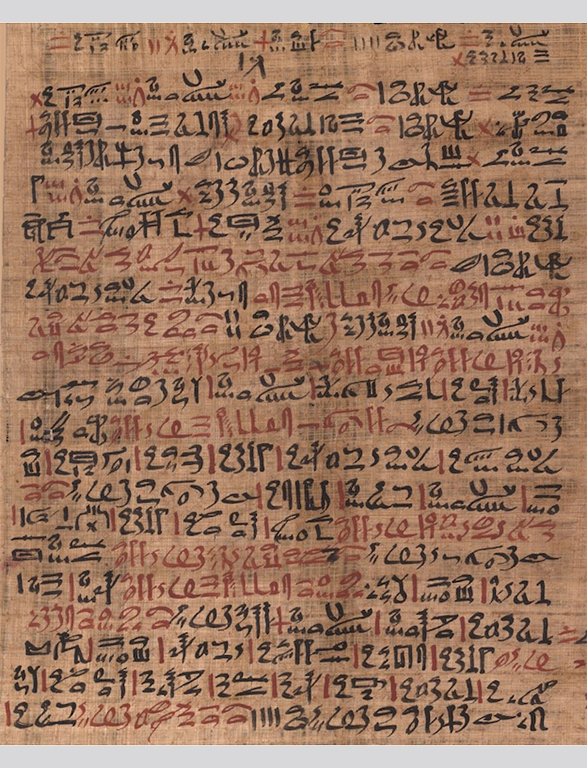 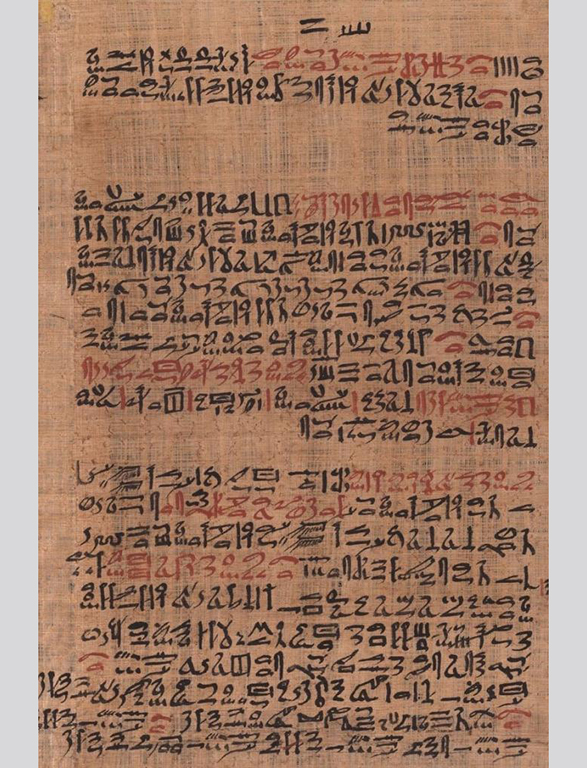 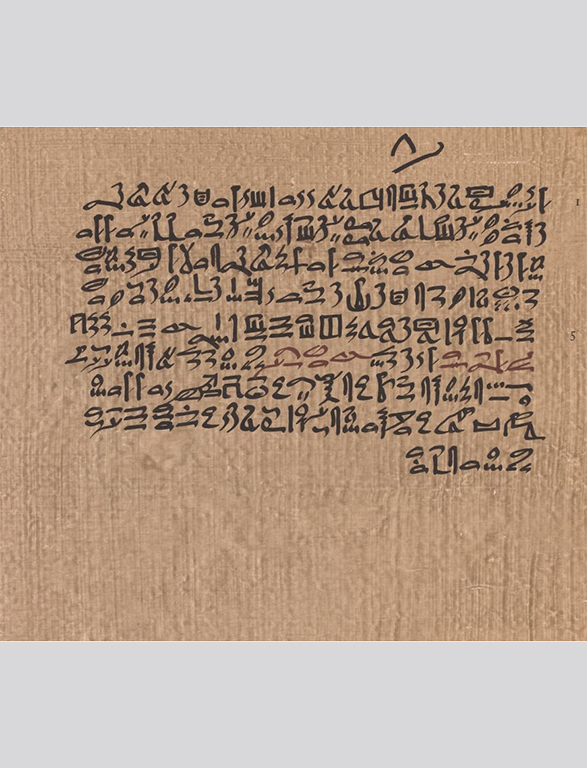