This early printed German bible (by Anton Koberger in Nuremberg in 1483) was given to the Leipzig council library, founded in 1677, by councillor Georg Wolf around 1700. Renamed city library in 1832, it burned down in 1943. Its treasures survived and have been kept in the university library since 1962.

This picture (Slider, Fig. 1) illustrates the beginning of chapter 31 of the Book of Exodus. God refers Moses to the craftsmen Bezalel and Aholiab, who should be appointed for the manufacture of devices and buildings. The woodcut shows both already working diligently. In the foreground visible is the ark of the covenant, for which the fixtures are been made. Above the heads of the men their names are written, spelled 'OOLIAP' and 'BEZELEEL'. Because the woodcut was originally made for a Cologne German Bible (printed in 1478), the names are written in the Lower Rhine dialect.
A large part of this edition of the Bible was already colored in the Koberger workshops. If different copies are compared, obviously similar paintings are found, which are however not entirely the same. The tents in the right of the background of the Leipzig copy are left white, with the tops of the tents decorated only with a few colorful rings. In other copies the tents are fully colored or colored with rings that change color from tent to tent.
Directly below the woodcut in the left column the chapter begins with 'Und der herr redt zu'. The small 'd' (e.g. in 'der') has such a heavily intricate ascender that it appears to be more similar to the number '8'. These developed upper loops are typical of the so-called Upper Rhine typeface, which took the Koberger typeface to be its paradigm.
The capital 'U' at the beginning of the chapter was written in by rubricators (freely translated as 'red makers') after the printing. It is easy to recognize because the rubricator made the beginning of every sentence obvious with a small red vertical stroke. Before the chapter number (right column above the woodcut) he placed an Alinea-sign (a linea = away from the line). This sign was originally used by medieval scribes in order to mark the beginning of a new passage in a continuous line, without having to make a new line. In this copy the chapter begins with a new line, so the Alinea-sign is more of an adornment.

The Nuremburg publisher Anton Koberger owned the most efficient printing factory of Germany in the end of the 15th century. Allegedly the workshop had 24 printing presses. Koberger's 1483 German Bible, produced at great expense, is the tenth printed early modern German Bible since the invention of the printing press. All of these Bible editions became obsolete later on account of Luther's translation. Koberger's Bible is endowed with 109 woodcuts, most of them colored. Today there are roughly 180 copies of this Bible held by libraries around the world.

(Slider, Fig. 2, 3) The Leipzig copy of the Koberger Bible has the following old mark of ownership: '1685 Georg Wolff, Alter Bürger in leipzigk, ältester Wexels Sensal, und der Kramer Innung Senior' (1685 Georg Wolff, old citizen in leipzigk, oldest 'sensal' changer and the senior interior tradesman). 'Sensal' is an old German designation for a broker. Georg Wolf acted as an agent of credit, and was not only a tradesman but also a kind of stockbroker. Around 1700 Georg Wolf gave the Bible to the Leipzig Council Library. This library dates to the endowment of Huldreich Groß, a lawyer at the elector's court. He bequeathed in 1677 to the city his private book collection (around 4,000 volumes) and money to the creation of a public library. Following his example, numerous citizens of Leipzig – including Georg Wolf – gave the library during precious printed books and manuscripts in order to grow and as a sign of commitment (and of presentable personal affluence).
In August of 1711 the Leipzig Council library was opened to the public with a celebration. The library was open to the public outside of the fair periods on Wednesdays and Saturdays from 2 to 4. It more than 14,000 volumes. The book collection quickly grew, so that the library by 1755 needed to move to the Gewandhaus (cloth hall). The library remained there, until it burned down during an air raid in December of 1943. The larger part of the old holdings was destroyed. Only the manuscripts and incunabula (prints from before 1501) and a few special collections were saved and subsequently given as a deposit to the university library, comprising around 1,800 manuscripts, 690 incunabula, 14,000 autographs, a collection of Leipzig printed books from the early 16th century and the library of the 'German Society' from the 18th century.

Alexander romance, Parchment manuscript from southern Italy, 13th century (Slider, Fig. 4)
[Rep. II, 143; fol. 103v]
The life of the Macedonian King Alexander, who in only a few years conquered the entirety of west Asia, was early on a literary subject. Entangled with numerous legends, the so named Alexander romance was an adventurous travel tale and one of the most favorite stories of the middle ages.
The picture shows much fantasy by the creator of the miniature went into the presentation of mythical and strange people, whom Alexander supposedly encountered in his military excursion into far India.
This copy of the Alexander romance came at an unknown time into the possession of the Leipzig Council Library. On account of the quality and the number of images it is one of the most precious surviving manuscripts. It has altogether 167 miniatures embedded in the text. The text follows a version from Late Antiquity, which made it way via Byzantium to southern Italy, whence the manuscript most likely originates.

Ars Moriendi [The art of dying], Leipzig: Kachelofen, around 1495/1498 (Slider, Fig. 5)
[Lib. sep. 5132; fol. 11]
One of the favorite genres of piety literature in the late middle ages was the 'Ars moriendi', the art of dying, which helped the faithful in their final hours to preserve their faith in God and their pious confidence. A popular version of this literature was illustrated books, in which full-page woodcuts illustrated the exhortations of the text.
The woodcut sequence opens with pictures of the Last Supper and confession, followed by the presentation of the five temptations and the five solaces, which befall the dying on their deathbed. The fourth temptation concerns the pursuit of glory, the spiritual arrogance of the sick, which refers to its alleged merit that lead to the belief that this one will receive preferential treatment on the Judgment Day. In the woodcut this temptation is made obvious by figures of the devil offering crowns for the dying.
The Leipzig printer Kachelofen published between 1495 and 1500in total seven editions of this illustrated book. The high artistic quality of the woodcuts makes this work a culmination of woodcut illustration in Leipzig around 1500.

Gospel Book, Parchment from Reichenau, late 9th century (Slider, Fig. 6)
[Rep. I, 57; fol. 10r-3]
This manuscript contains the gospels read in church during service. It comes from the Benedictine monastery of Reichenau, known for its Scriptorium. The monastery was founded in 724. The illuminations of the Reichenau monastery were included in the Memory of the World Program.
The Gospel Book, which in 1743 was first mentioned to be in the possession of the Leipzig Council Library, is richly decorated with illuminations. The picture shows the beginning of the Gospel of John. The first word of the Gospel, the 'In' of  'In principio erat verbum' (In the beginning was the Word), is realized in monumental form in an architectural frame in interlacing bands.
In accordance with the sumptuous illustration the single band of the Gospel Book is adorned with a byzantine ivory relief with Mary and the Christ child.

Ars memorandi, Block print from southern Germany: unknown printer, around 1465 (Slider, Fig. 7)
[Rep. II, 115; fol. 17]
In the second half of the 15th century there were so called 'block prints'. The full-page woodcuts displayed not only pictures, but also accompanying text. The picture like the text was carved into the wooden printing material. Because the printing materiel was quickly worn out, this method of duplication permitted only small print runs. The technique could not compete with the method of typographic book printing developed at the same time.
Block prints have survived only in a few copies and are always especially coveted collector's items. The Leipzig Council Library holds two of these rare prints, a Bible of the Poor and also an 'Ars memorandi' [mnemonics].
This book explains how memory can be improved through the use of pictures. In the picture a memory device for the Gospel of Matthew is displayed. The central figure of the picture is an angel, the symbol for the evangelist Matthew. The objects supplied with numbers framing the angel refer to the individual chapters of the Gospel of Matthew. Chapter 19 deals with matrimony, so the figure is of joined hands. Chapter 20 tells the parable of the works in the vineyard, and therefore has grapes. Chapter 21 is the story of Jesus entering Jerusalem and is thus the head of a donkey.

Valerius Maximus: Factorum dictorumque memorabilium libri IX [Events and Things Worthy of Remembering in Nine Books], Parchment manuscript from Flanders, around 1480 (Slider, Fig. 8)
[Rep. I, 11b; fol. 72a]
The gathering of facts and anecdotes of roman history by Valerius Maximus in the 1st century was a favorite read during Humanism, when readers turned towards the Ancients. Numerous manuscripts of this historical work have survived; it was also copied many times early in the history of printing.
The copy of the Council Library is a magnificent manuscript, which was produced in Flanders, probably in Bruges. Each book of the nine begins with a miniature. The miniature of volume 6 shows the death of Lucretia. She was raped. Though her husband and father absolved her of all guilt, she resorted to suicide on account of her dishonor.
In the Renaissance the death of Lucretia was a widely prevalent picture motif. Although most paintings have her stabbing herself in the breast with a dagger, in this miniature she falls on a sword.

Digitalizations of other editions of the Koberger Bible are found on the following sites:
*Uni Freiburg
*Uni Heidelberg
*Digital collections
*Duchess Anna Amalia Library
A biography of the printer Anton Koberger in the Deutsche Biographie. 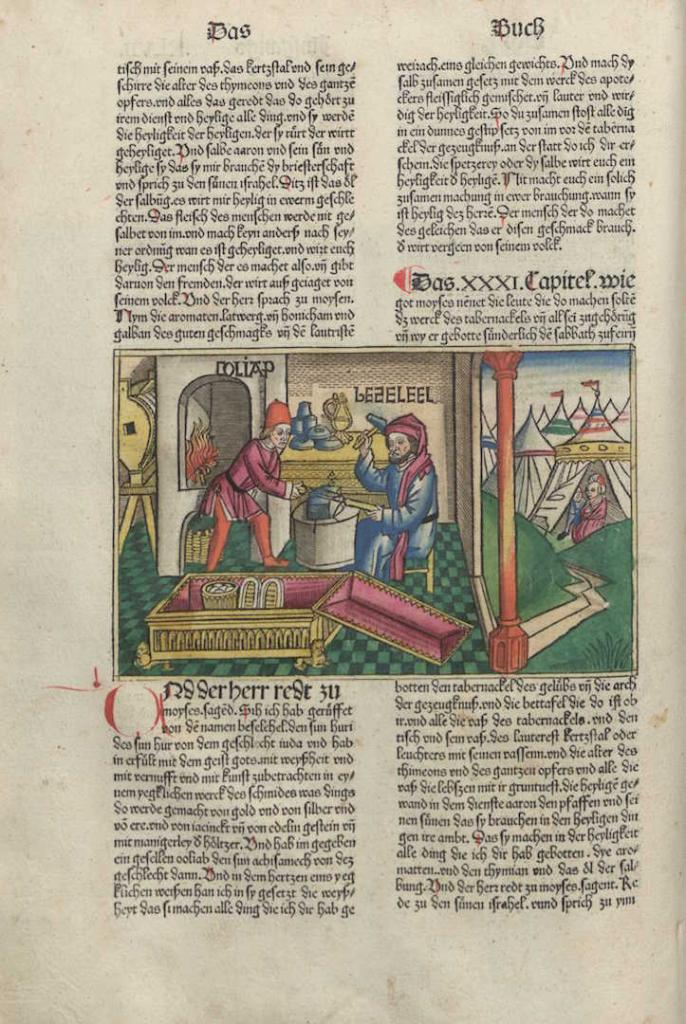 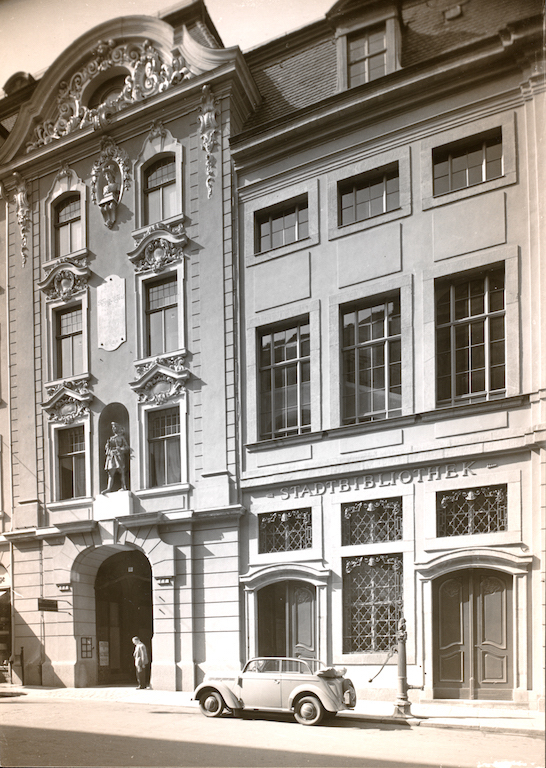 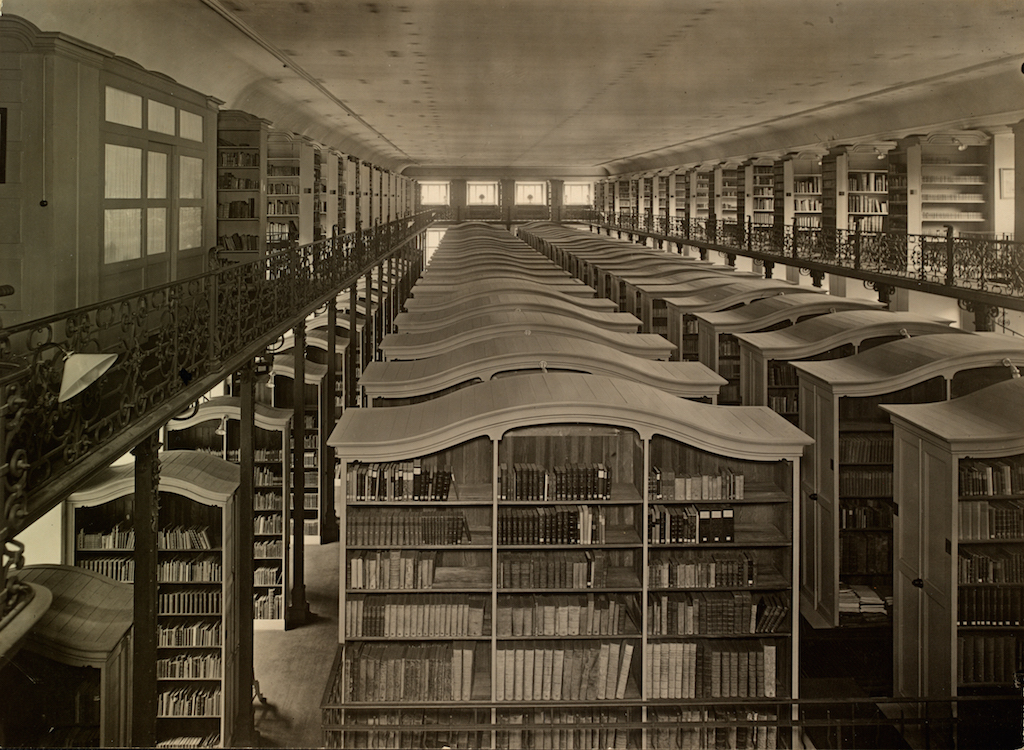 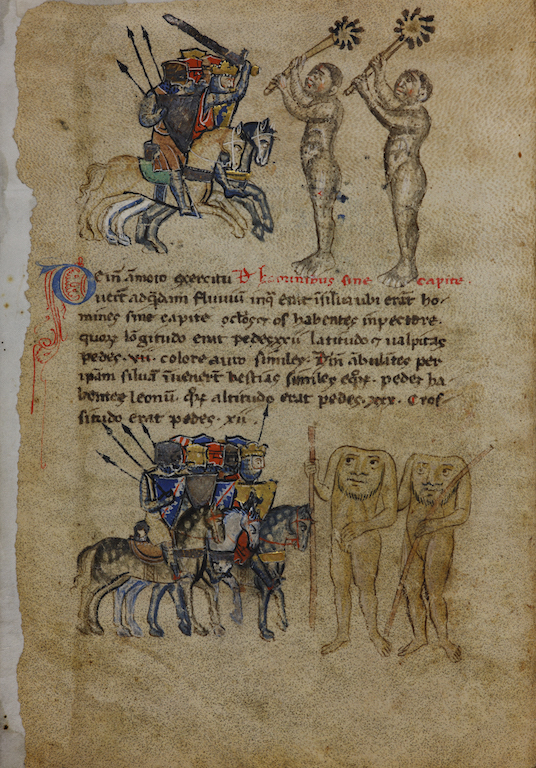 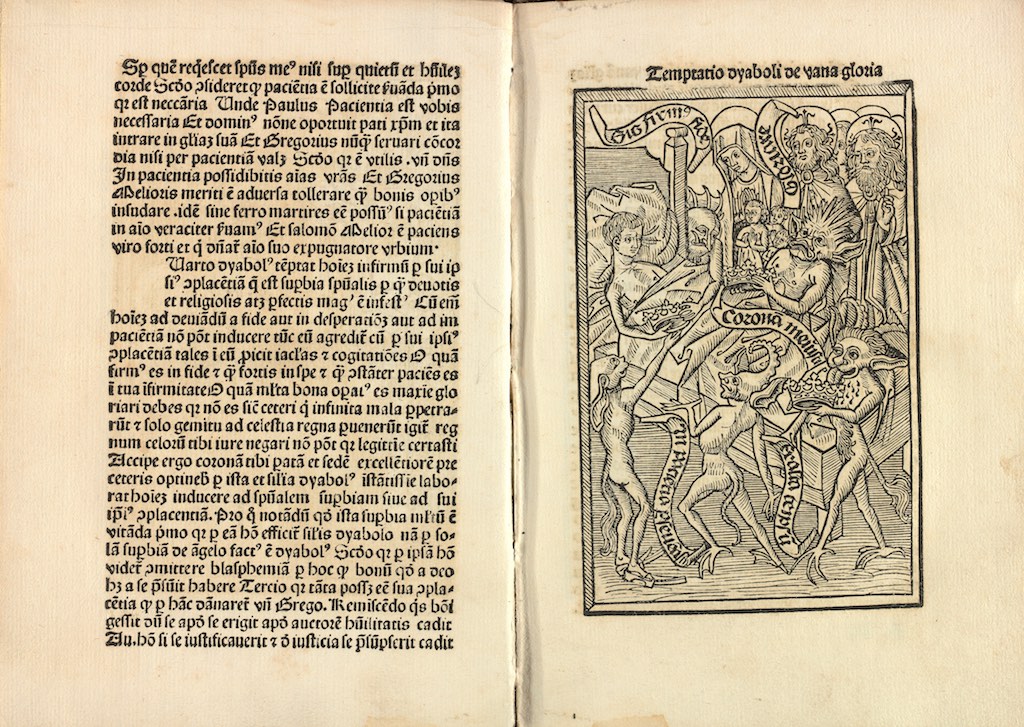 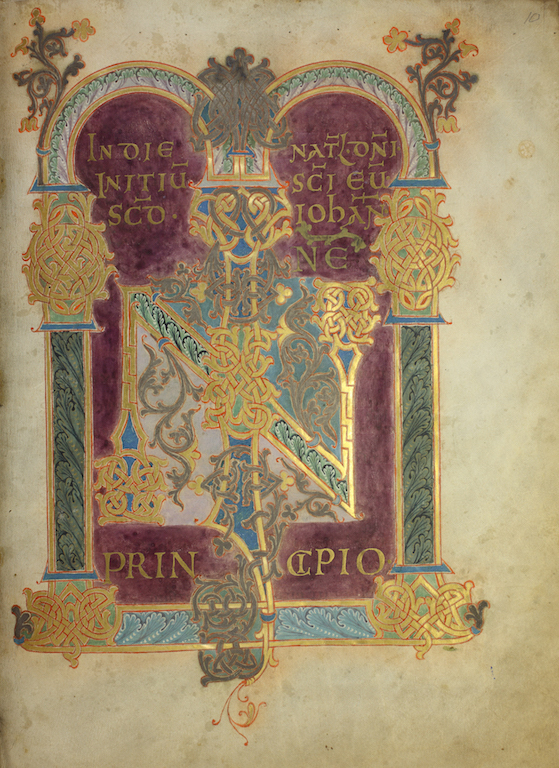 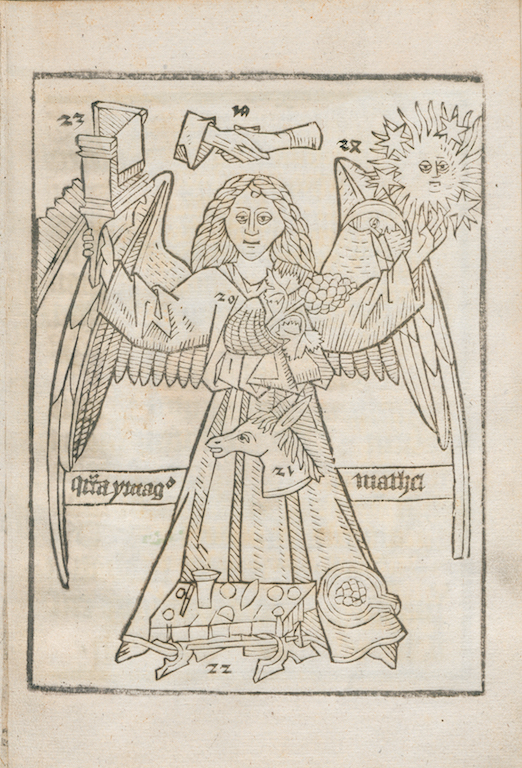 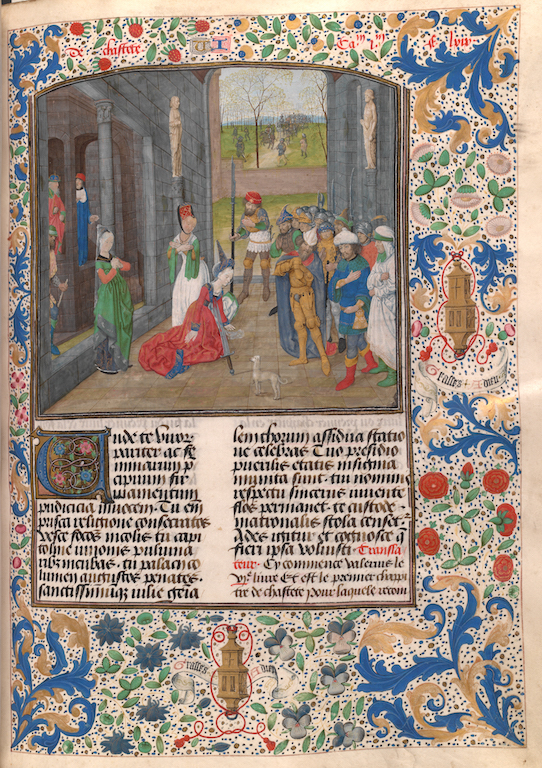