This depiction of academic disciplines is included in a 12th-century work from eastern France. The work belonged to the Altzelle monastery and was transferred to the university during the Reformation. The collection of medieval texts in the university library comprises around 3,000 manuscripts.

In the Middle Ages books had no title page. Where what text began therefore had to be marked in a different fashion. The displayed page (Slider, Fig. 1) shows a copy of The Consolation of Philosophy, a work by the Late Antiquity philosopher Boethius (died around 525 AD) that was very well known in the Middle Ages. The start of the text is marked visually in multiple ways: via a red caption mentioning the author and the title, via a red initial, via the writing of the first line of the text in capital letters – and most importantly via the portrayal of a crowned woman with a full page watercolor painting.
The female figure represents the personification of philosophy, which in Boethius’ work appears to the imprisoned author and consoles him with instruction via a dialogue. Therefore the painting is a title miniature. The painting presents philosophy as a queen with crown and scepter. In front of herself the queen holds a ladder, whose rungs are inscribed with the so-called 'seven free arts,' a system of disciplines that every student learned at university. In ascending order they are: grammar (Latin instruction), dialectic (argumentation), rhetoric (speaking style), arithmetic (calculation), geometry (surveying), music (theoretical teaching of harmony), and astronomy (calculation of the movement of heavenly bodies). Philosophy forms the crown of this course of studies.
Boethius' work was in the Middle Ages a central text for school teaching, through which Latin in different poetic meters could be learned. The manuscript shown here comes from an institute of higher education, possibly a monastery or a cathedral school. This is recognizable by the generous spacing between the verse lines, thickly filled with the explanations of words. Commentaries are written in the large margins.

The manuscript was produced in the second half of the 12th century, possibly in eastern France; the handwriting and the style of the illustrations indicate as much. An origin between 1160 and 1180 in the Champagne region is most likely; this region was one of the intellectual centers of the time. Fitting this theory, on an originally blank page at the beginning of the manuscript a library inventory was written in the early 13th century. This inventory documents the holdings of a school and indicates extraordinary and extensive holdings. The Boethius manuscript belonged to this monastery or cathedral library.
In the 15th century the manuscript was located in the library of the Cistercian monastery of Altzelle (near Nossen), the most famous monastery in Saxony with a rich collection of books. After the closing of the monastery during the Reformation the manuscript ended up in Leipzig in the 16th century.

History of the monastery holdings (Fig. 2)

Although Leipzig University was founded in 1409, there was no university library until well into the 16th century. However, book collections were created by individual university facilities during the 15th century.
When the Reformation was established in Leipzig in 1539, the humanist Caspar Borner (Slider, Fig. 2) became rector of the University and decreed that the books of the closed monastery could be used by the University; consequentially a central and extensive book collection was created: the birth of the Leipzig university library.
The famous book collection of the Leipzig Dominican monastery formed the core of the new university library; the collection of St. Paul monastery was given in its entirety to the University by Herzog Moritz in 1543. In addition books from the other Leipzig monasteries – the Thomas school and the Franciscan monastery – came to the library. Further important libraries from monasteries were selectively transferred to Leipzig as well, and so the inventories of the Cistercian monastery of Altzelle (1543) and Buch (1547), of the Benedictines in Pegau (1543) and Chemnitz (1544), of the Augustinians of Lauterberg bei Halle (1543), and of the Dominicans of Pirna (1545) all came to Leipzig. Hence the university library at once became then the largest library in Saxony, with roughly 6,000 printed books and 750 manuscripts (with at least 3,000 individual titles) by 1550.
Caspar Borner (1492-1547) studied in Leipzig from 1507 onward and taught mathematics and astronomy at the University from 1523 onward. As rector he began the introduction of the Reformation at the University and founded the university library in 1543 with books from the former monasteries of the city.

(Slider, Fig. 3) The oldest books held in today's Saxony came from the Benedictine monastery of Pegau (30 km south of Leipzig), which was founded in 1097.
All of these manuscripts contain core monastic texts, such as in this manuscript, Ms 332, the dialogues of Pope Gregory I, in which the lives of saints and visions from beyond are collected. The Windolf manuscripts are adorned with red initials and were probably – based on their old age – so used that already in the Middle Ages the script needed to be retraced.
In possession of the Leipzig University Library there are four Pegau manuscripts, belonging to the former core collection of this monastery which received them through Abbot Windolf, who has been the founding abbot.

(Slider, Fig. 4) Manuscript Ms 1279 contains an extensive collection of German language prose and poetry from around 1465. All these texts have only survived here. The manuscript was the personal hand copy of the author and features a singular view into the literary production process in the Late Middle Ages: it shows texts in development, during editing, and in correction for the final version. The author was most likely Johannes Grundemann, the then provost of the Thomas School.
The page shown here indicates the numerous changes of the editor to the text during the transcription. The pages belongs to Grundemann's translation of Appollonius' novel, a Late Antiquity travel and adventure romance.

Ms 1325, fol. 204v (Slider, Fig. 5)
In the collective manuscript Ms 1325 the famous Pegau Annals have survived, which are the most important historical source for the history of central Germany in the 11th and 12th centuries. The Pegau Annals begin with a detailed account of the life and deeds of Wiprecht of Groitzsch, who from 1070 onward was one of the most powerful nobles in the eastern part of the Holy Roman Empire. The page shown here account the birth of his two sons – who were conceived during his marriage to the Bohemian king's daughter Judith. This part of the manuscript was written in 1150. The Codex comes from the Benedictine monastery of Pegau, which Wiprecht founded.

(Slider, Fig. 6) The university library possesses nine parchment manuscripts in large format from the second half of the 13th century. They contain both texts from the Bible and Bible commentaries, which are connected to one another via their selected illuminations of initial characters.  The exceedingly high quality book illustrations are from an unknown Italian artist, who was active for various clients both north and south of the Alps.
The page shown here contains the beginning of the Biblical book of Ester. The text – written quite largely – is the prologue (with an L-initial) and the actual Bible text, beginning with the I-initial. In small script the 'Glossa ordinaria' is written next to the text, a common Bible commentary. The I-initial shows in three stripes the story of Ester up to the hanging of the Vizier Haman, who wanted to obliterate the Jewish people.
The Leipzig manuscripts were probably produced for members of the Silesian high nobility. They probably reached the Leipzig Thomas School from Breslau in the middle of the 15th century.

(Slider, Fig. 7) In the years 1460 to 1480 a high-ranking book painting shop was active in Leipzig. It was identified as a 'peacock shop,' because many representations of peacocks were utilized in its splendid vine illustrations.
The page shown here illustrates the opening page of a manuscript with the Summa contra gentiles (Against the Heathens) of the well-known Dominican theologian Thomas Aquinas (1225-1274). In the figuratively illustrated initial Thomas Aquinas is presented as a teacher with a lectern, getting inspiration from the Holy Ghost in the form of a dove. A religious student sits in front of him. The painting style with the field-initials and the subsiding ranks of acanthus is likely influenced by the light, bright colors of Bohemian book illustrators.
The manuscript may have come from the Leipzig Dominican monastery.

Online presentation of the digitalization of Ms 1253 together with a description of the manuscript.

Online presentation of the digitalization of Ms 1279 together with a description of the manuscript.

Online presentation of the digitalization of Ms 1325 together with a description of the manuscript.

A history of the Leipzig University Library.

Manuscripts of the Leipzig University Library: information on the library website. 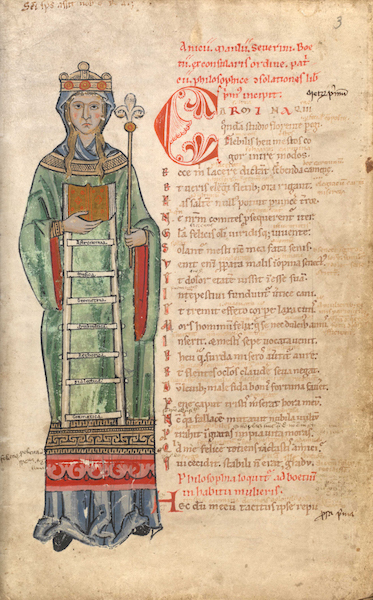 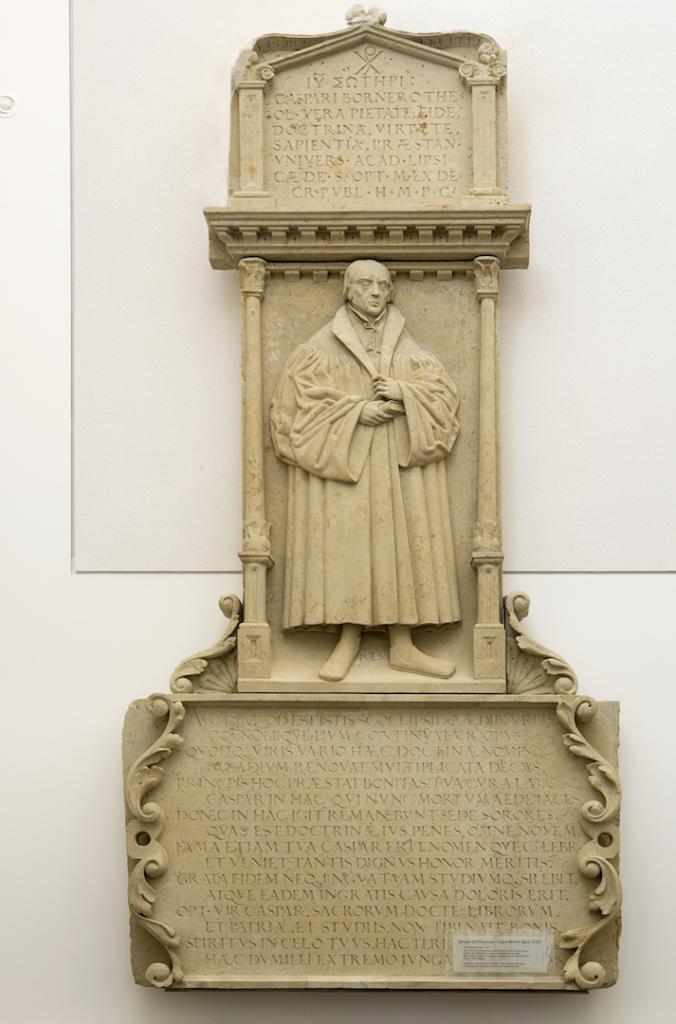 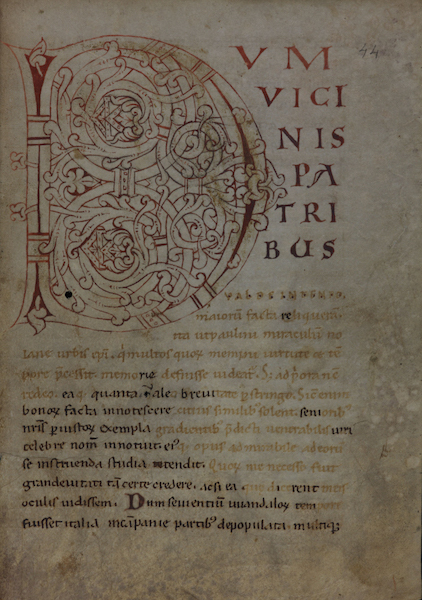 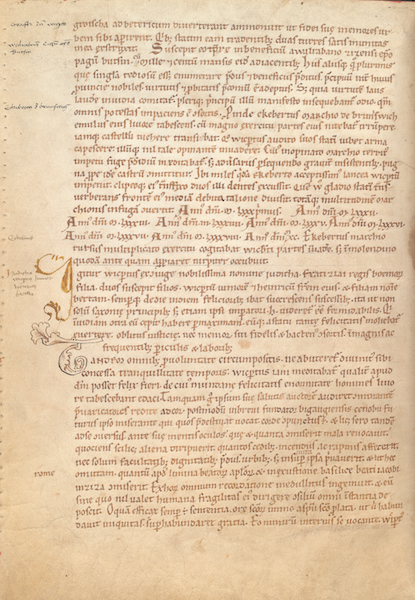 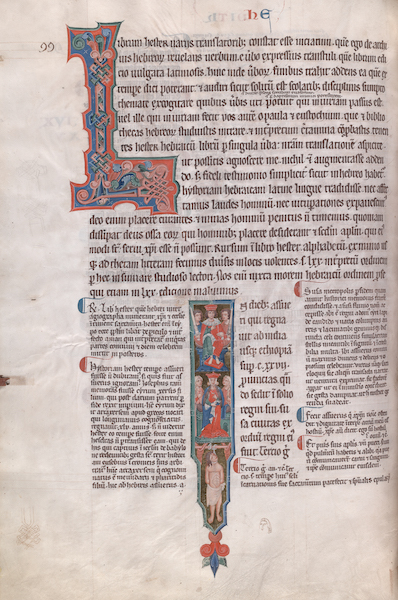 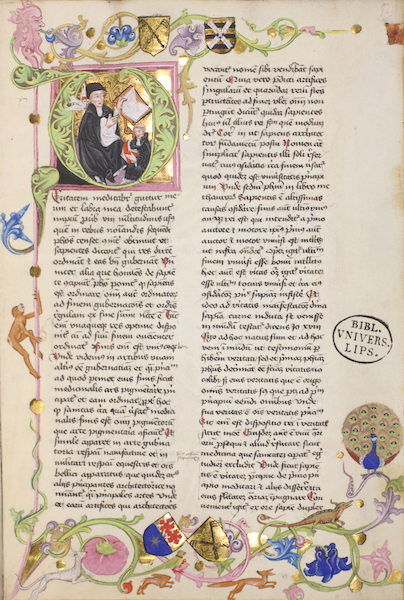