Provenance research is a substantial task for Leipzig University Library due to its wealth of holdings from many different sources. One important aspect of this is to identify and document unlawfully acquired items, locate the owners or their heirs, and ultimately find fair, just solutions involving either the restitution of books to their rightful owner or continuing to preserve them in the library.

A key obligation in this regard is to investigate the seizure of cultural assets by the Nazis. Here, Leipzig University follows the Washington Principles on Nazi-Confiscated Art of 3 December 1998 (the Washington Declaration) as well as the joint statement by the German Government, the Länder and the national associations of local authorities on the tracing and return of Nazi-confiscated art (german only), especially Jewish property, dated 9 December 1999. In addition, books are identified which came into the possession of Leipzig University Library as a result of expropriation measures conducted between 1945 and 1989 on the territory of the Soviet occupation zone and the German Democratic Republic (‘East Germany’).

What is provenance research?

Provenance research comprises ascertaining the history of the origin and changing ownership of works of art and other cultural artefacts.

Provenance research in libraries is important for:

Knowing about the ownership and use of individual books helps us to answer questions regarding all sorts of historical aspects, and is especially relevant for literary studies and historiography. Knowledge about historical collecting contexts is also of great interest to the library. The older items are, the more difficult provenance research usually becomes.

By signing the 1998 Washington Declaration, Germany, too, pledged to find in the country’s holdings works of art and cultural artefacts (including books) which had been confiscated or forcibly sold during the Nazi era and to establish their rightful owners. Libraries have also increasingly taken on this task since the late 1990s.

In addition, there are other items that have been acquired illegally, especially in libraries in eastern Germany. There are now justified restitution claims for items seized from the owners of mansions and large estates in first the Soviet occupation zone (1945-1949) and then the German Democratic Republic. Other claims result from the confiscation of assets from private collectors and businesses starting in the 1970s in connection with criminal tax proceedings when people emigrated from East to West Germany.

Research into the development of library holdings by finding out what happened to individual items and even entire collections and also the analysis of archive material promotes the transparency of publicly managed libraries. Accordingly, they need to be able to provide information to the public at all times. Provenance research is also useful in connection with exhibitions of books as well as academic research into book collections.

Interest in the provenance of books usually results in the preservation of items in special collections. Whereas libraries normally dispose of any duplicates they may have, this does not apply to works which are of interest in terms of provenance history. The catalogue must list any information on provenance which has been gleaned. Provenance determination adds a certain value to holdings as cultural archives of written material, and means they should be preserved if only for this reason.

Provenance cataloguing at Leipzig University Library takes place step by step and on a project basis. We observe the German Library Association’s Recommendations for Provenance Cataloguing and the T-PRO Thesaurus of Provenance Terms. The details of provenances determined are partly recorded in the K10plus integrated database and partly in the catalogue of Leipzig University Library. Work is currently underway to compare and combine the information contained in both systems.

So far, the following have been catalogued:

At present, more than 22,600 provenance records can be searched in the Leipzig University Library catalogue (under ‘Advanced search’).

In future, provenance cataloguing will also be carried out in the GND Integrated Authority File for Persons, Corporate bodies, Conferences and Events, Geographic Information, Topics and Works as well as the K10plus integrated database.

Property stolen by the Nazis at Leipzig University Library

After Munich artist Wolfram P. Kastner had recalled the Nazis’ book burnings of 1933 with a large scorch mark and spoken in the accompanying debate about books looted during the Nazi era, this prompted staff at Leipzig University Library to check whether there were any books in its possession that had been unlawfully acquired at that time. Under a contract financed by the Coordination Centre for Lost Cultural Assets in Magdeburg (now the German Lost Art Foundation), in 2001/2002 cultural scholar Grit Nitzsche was appointed by Leipzig University Library to carry out random checks on its holdings and inactive records. She found about 30 books suspected of having been acquired unlawfully and was able to return some of them to the owners’ heirs.

In 2007, the examination of inactive records began. Numerous references were found in a separate acquisitions register to literature received following its confiscation by the Gestapo. Other evidence which was discovered included correspondence with the Reich Exchange Office in Berlin, an agency which offered seized books for exchange.

Based on these findings, in 2008 the Coordination Centre for Lost Cultural Assets in Magdeburg agreed to partly fund a project called ‘Assets Looted by the Nazis in Leipzig University Library’. In the first phase (September 2009 to November 2010), acquisitions from 1933 to 1945 were reviewed while acquisition lists compiled by the Gestapo as well as the Reich Exchange Office (preserved at Berlin State Library) along with other sources from the inactive records indicating unlawfully obtained items were examined.

Random samples of items acquired after 1945 showed that books seized by the Nazis continued to join the holdings of Leipzig University Library long after the war was over. Therefore, the project was extended to examine items acquired between 1945 and 1970. In the second phase (January to December in 2011), illegally acquired items were mainly found among acquisitions from an East German agency known as the Central Office for Old Academic Holdings in Gotha (later Berlin). In addition, more acquisitions from the period 1933 to 1945 were found which were only catalogued after 1945 owing to the partial relocation of the library following its destruction in an air raid in 1943.

During the two project phases, all in all about 20,000 volumes were autoptically examined. Some 6,000 volumes suspected of having been looted by the Nazis were identified, recorded in the catalogue as such and reported to the database maintained by the German Lost Art Foundation. There is also an excerpt from the catalog as a separate collection "NS-Raubgut an der UB Leipzig". Furthermore, the results of the project were presented in an exhibition at Bibliotheca Albertina (27 November 2011 to 18 March 2012) and the accompanying exhibition catalogue.

Even though the project is now officially over, the search for Nazi-looted property continues. Illegal acquisitions from the Nazi era frequently crop up in deliveries of old holdings from the various branches of Leipzig University Library and are appropriately dealt with. So far, 897 items have been either returned to heirs of the owners or preserved at the library under amicable solutions reached with them.

If books could talk …

... they’d be able to tell us a lot about who acquired and read them, what paths they took, and about the adventures they and their previous owners had before they arrived at Leipzig University Library.

Cordula Reuss tells us some of these stories in our blog series ‘Wenn Bücher reden könnten ...’ (‘If books could talk …’). 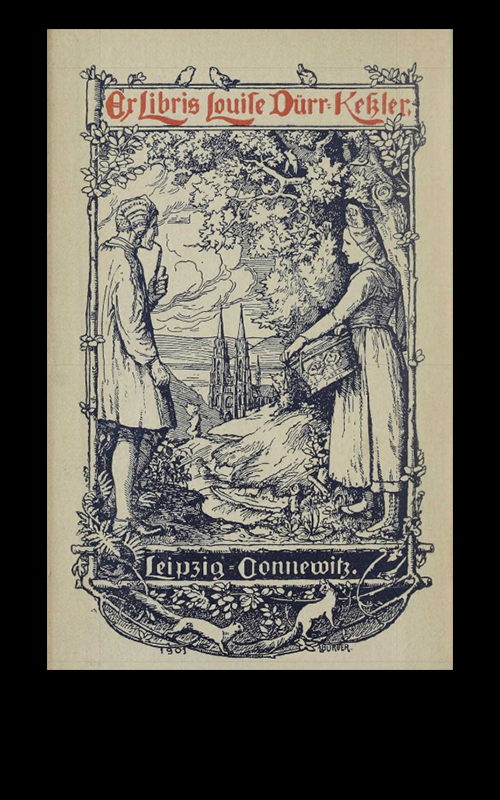 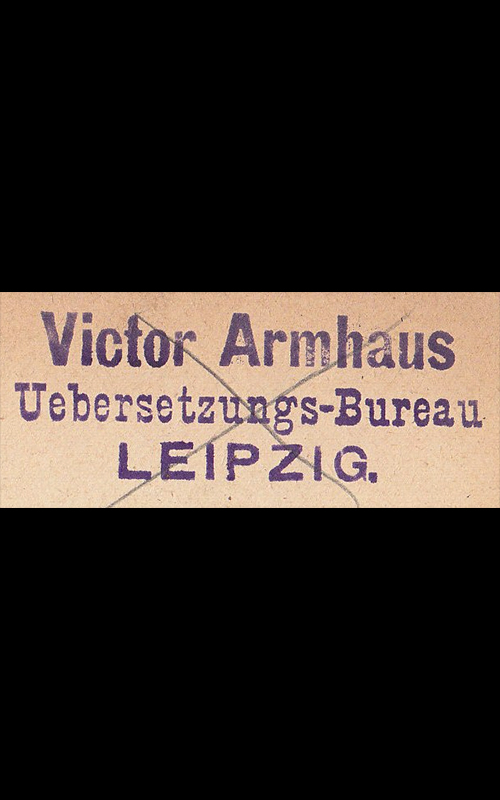 Stamp of the translation firm of Jewish translator Victor Armhaus from Leipzig (1859–1942, died in Theresienstadt Ghetto) 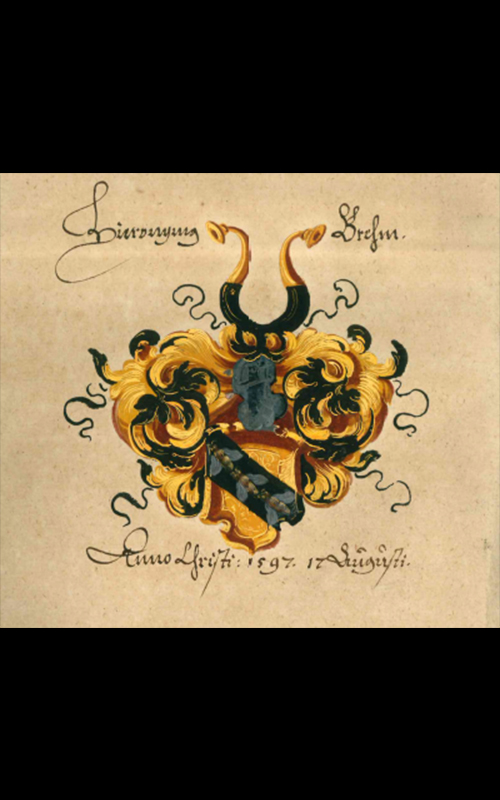 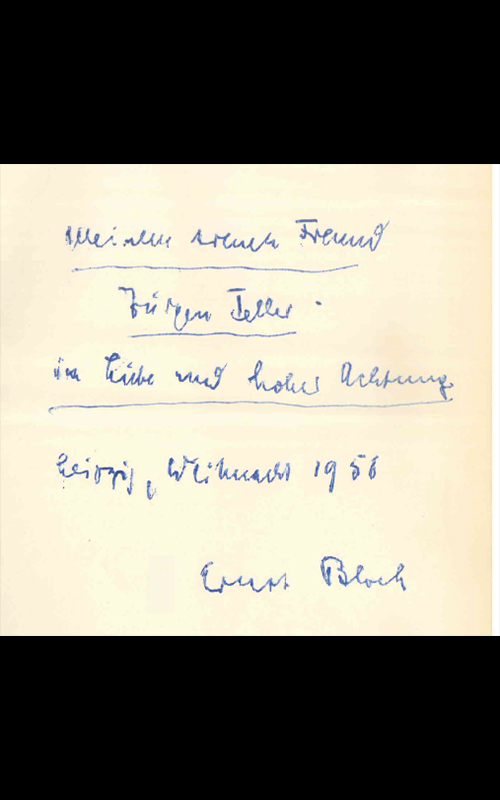